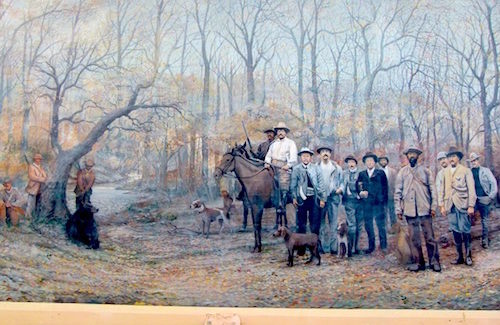 A well-loved teddy bear rests in a rocking chair in my guest room. The worn stuffed animal belonged to my husband Bill when he was a child.

Years ago, I was curious as to how that childhood favorite critter got its name. I found the answer. But I was also happy to see a mural about the teddy bear namesake when my American Duchess riverboat stopped in Vicksburg, Mississippi.

There on the flood wall was a mural explaining the history of the popular teddy bear. So, my question is, do you know the true story?

A hint: The answer involves a well-known historical figure who was an accomplished “Rough Rider.”

Don’t look at the answer below until you have formulated your own response. If you are correct, give your teddy bear a nice warm hug.

If you didn’t know the answer, you might want to book a cruise on the American Duchess or its sister the American Countess and visit fascinating Vicksburg to enjoy the colorful and historic flood wall.

President Teddy Roosevelt was happy to get out of the White House and go hunting in the woods about 25 miles north of Vicksburg. He set out for the four-day hunt on a fine November day in 1902.

When dogs treed a bear and the guide signaled for the President to shoot the animal, the nation’s leader refused. Hearing about the story, political cartoonist Clifford Berryman drew a sketch of Teddy Roosevelt with a little bear tied to a tree and the caption “Drawing the line in Mississippi.”

Soon toy manufacturers were producing “Teddy’s Bears” in honor of the event. The stuffed toys were later called teddy bears.

“That’s a true story,” says tour guide Michael on my American Duchess Steamcoach. “A lot of people don’t know that’s how teddy bears got their name.”

That fascinating bit of trivia is featured on Vicksburg’s Riverfront Murals, 32 murals painted on the city’s flood wall by renowned artist Robert Dafford.  Each mural measures a huge 12-by-20 feet.

When the American Duchess docked in Vicksburg, we could easily walk off the boat and visit the nearby flood wall. For my day in the city, however, I used the hop-on, hop-off Steamcoach to ride around downtown and then got off when the bus neared the flood wall.

“Each mural was paid for with private funds,” Michael says. “Not bad for a city with a population of about 23,000.”

I had seen Robert Dafford’s work on other riverfront murals and think it is an excellent idea. The large concrete walls are a necessity for flood protection from the Mississippi River but having them painted with local history is a pleasure to see.

The artist did similar murals in Portsmouth, Ohio; Cincinnati, Ohio; Maysville, Kentucky; and Paducah, Kentucky. It was in Paducah that Vicksburg resident Nellie Caldwell saw the Louisiana man’s work and chaired a committee to bring him to Vicksburg.

For his projects, the artist meets with local officials and historians to create a list of subjects related to the town’s history. The walls are water-blasted and covered with a coating that fills up the surface and smooths it out. Then Robert Dafford designs and completes each mural.

On April 12, 2002, the City of Vicksburg unveiled its first riverfront mural. The panels feature the city’s role in American history, commerce, culture, region and technology.

One of my favorite murals honors blues legend Willie Dixon including his quote “The blues are the roots, the rest are the fruits.” Born in Vicksburg in 1915, Willie Dixon created a playlist of more than 500 songs performed by some of the most famous artist of the 20th century, including Muddy Waters, Sam Cooke, Etta James, the Rolling Stones, Elvis Presley and Eric Clapton.

The mural shows Willie Dixon playing in the Blue Room, a famous Vicksburg lounge. The Blue Room opened in the 1940s and closed in 1972. Called “The Poet Laureate of the Blues,” Willie Dixon died in 1992 at age 76.