Even on a sunny California day, the island was shrouded in fog. We were almost on it before the sun broke through and we could see it well.

The island is one very scary place, and that is exactly what it was intended to be.

Rising from the middle of San Francisco Bay in California, Alcatraz Island drips with the dark atmosphere of danger and notoriety. Perhaps the most famous ex-jail in the world, Alcatraz doesn’t have a creepy reputation for nothing. From the start, Alcatraz was for the “worst of the worst.”

For the first time in over a year, Alcatraz Cruises has resumed its ferry service operations to Alcatraz Island. The ferry service was shut down for the COVID pandemic.

“We are thrilled to welcome back guests to Alcatraz Island aboard our Alcatraz Cruises fleet and are excited that both locals and tourists alike will be able to once again experience our city’s iconic landmark,” Antonette, assistant general manager of Alcatraz Cruises, said in a news release.

Alcatraz is the official concessioner to the National Park Service and the only operator that goes onto the island. The ferry leaves from Pier 33 Alcatraz Landing, a quarter mile from Fisherman’s Wharf in San Francisco.

Once on the island, visitors will be able to walk through the historic structure and experience the windswept island. They will learn about its layered history through outdoor interpretive signs, a free Discovery Guide and digital apps with historical information, stories and more.

Rangers also are stationed around the island to assist visitors and answer questions. The Alcatraz Cellhouse also will be open for the first time since closing over a year ago due to COVID-19.

Over 29 years, about 1,545 men did time in Alcatraz. Some never left the island alive. Eight men were murdered by fellow inmates, five committed suicide, 15 died of natural causes and seven were shot trying to escape.

“The main obsession was escape,” Diane said. Were they successful? Yes. No. Maybe. Thirty-six prisoners were involved in various escape attempts. Whether they lived to tell the tale, in some instances, is still a mystery.

Ironically, the very place where inmates were once willing to risk their lives to escape is now a popular tourist attraction. More than 1.2 million visitors can’t wait to get there every year.

Alcatraz closed as a federal penitentiary on March 21, 1963. The National Park Service became the island’s caretaker in 1972.

As the last prisoner to leave Alcatraz was boarding the boat, he was quoted as remarking to a crowd of reporters and photographers, “Alcatraz was never no good for nobody.”

The story of Alcatraz Island begins in 1775 when it was “discovered” by the Spanish explorer Juan Miguel de Ayala. Little more than a rock inhabited by pelicans, Alcatraz was named Isla de los Alcatraces, the Spanish word for pelicans.

The rocky, barren island didn’t seem to have much value. But its location made it useful when the California Gold Rush hit. Strategically placed at the mouth of the San Francisco Bay, the island was the perfect site for a fort. In 1857, a citadel was built on Alcatraz.

However, the fort never saw combat and its defenses quickly became obsolete. In 1907, the Army decommissioned Alcatraz as a fort. But Alcatraz also was a military prison almost from the very beginning.

The Great Depression of the 1930s made Alcatraz what it is known for today.

The gangster era was in full swing. The nation witnessed violent crime waves brought on by Prohibition and those driven by desperate need. Influential mobsters and sharply dressed public enemies exerted heavy influence. The public watched in fear.

Alcatraz seemed the ideal solution. It could condemn public enemies and serve as a very visible warning to this new brand of criminal. The old military prison was modernized. Guard towers were erected. With its natural isolating barrier created by the icy and swift currents surrounding it, Alcatraz was ready to confront the nation’s hardest criminals.

Wardens from various penitentiaries gave their most incorrigible inmates to the Rock. Inmates with histories of unmanageable behavior, escape attempts and high public profile inmates who were receiving privileges because of their status and notoriety made up the population. Inmates arrived in San Francisco by railroad and were immediately transferred to Alcatraz.

“They never set foot in San Francisco,” Diane said, gesturing to the railroad portal still standing where inmates arrived. “That was an important fact.”

Inmates weren’t sent to Alcatraz for rehabilitation. They were there to learn how to live by the rules. A mattress to cover the concrete bed, a blanket, a pillow, a job, a book to read, a letter to loved ones – all privileges had to be earned. And those privileges could just as easily be removed for the slightest infraction.

“You are entitled to food, clothing, shelter and medical attention. Anything else you get is a privilege,” stated Rule No. 5 in the prison handbook.

In August of 1934, Alcatraz received its first group of inmates — among them Al Capone, Doc Barker (the last surviving son from the famous Ma Barker Gang), George “Machine Gun” Kelly, Robert “Birdman of Alcatraz” Stroud, Floyd Hamilton (a gang member and driver for Bonnie and Clyde) and Alvin “Creepy” Karpis.

It was in Alcatraz that Capone lost his mind. Some say it was the devastating Alcatraz regimen. Others say it was syphilis, a disease he evidently had been carrying for years and from which he eventually died. Maybe it was both. “It looks like Alcatraz has got me licked,” Capone said while an inmate.

Just beyond the guarded concrete walls and barbed wire was San Francisco, a mile and a half away. Not surprisingly, 36 prisoners were involved in various attempts. Two actually made it off the island, but were quickly captured. Seven inmates were shot and killed trying to escape. Two drowned and five have been unaccounted for, presumed dead.

In 1963, Alcatraz was closed. U.S. Attorney General Robert F. Kennedy said his decision to close Alcatraz was based on increasing maintenance and operating costs. Since then, the island has been left to tourists.

Lost in the fog between reality and myth, Alcatraz has become one of San Francisco’s most famous landmarks. “If these walls could talk,” our guide said, “think of the dark history these walls have witnessed.” 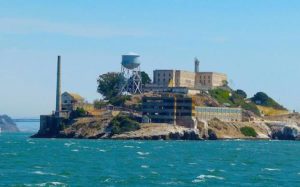 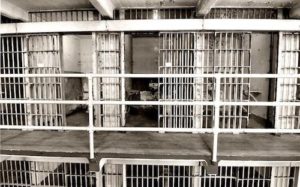 Cover Photo: Alcatraz was closed as a prison in 1963 (also see Al Capone’s cell at Alcatraz at bottom of story)