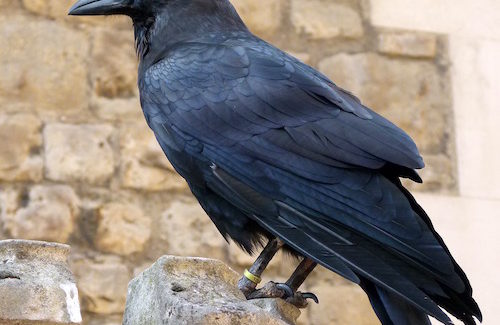 How about a really tough challenge? This raven is one of seven that live very pampered lives. A caretaker makes sure they are well fed and not inclined to fly away.

Every night the ravens are safely secured in their comfy cages to protect them from marauding foxes.

However, if the ravens did manage to leave, legend says the results would be quite dire.

So, the question is what is the famous place where these special ravens live? And, for bonus points, do you know the legend behind why the birds must never abandon their historic home.

A tip – although I adore the writings of Edgar Allen Poe, these are not his ravens quoting “Nevermore.”

Another tiny tip – with all the royal hullabaloo surrounding the recent interview of a married couple, it might be wise to remember the warning these black birds bring.

Don’t look at the answer below until you’ve formulated your own response. Congratulations if you are correct.

If you didn’t know the answer, you might want to book a cruise and visit this high-born place yourself.

This raven is one of seven that occupy the infamous Tower of London. By Royal Decree, the Tower must be home to at least six ravens.

They are huge birds, and no wonder because they are so well fed by the Yeoman Warders. Since the reign of King Charles II in the mid-1600s, the ravens have been protected and pampered by the royal decree to be sure they stay.

The Brits have no desire for the ravens to leave. An old legend says that if the day ever comes when the ravens fly away from the Tower, the monarchy will end and England will fall.

Brits did get a scare when Merlina, the queen of the ravens, disappeared in January and is presumed dead. That still leaves the necessary six ravens with one to spare.

Dating back to 1070, the Tower of London has acted as a fortress, a prison and a palace at various points throughout history. At least one king and perhaps two young princes have been murdered inside its walls.

Famed explorer and writer Sir Walter Raleigh was twice imprisoned in the Tower when he incurred the wrath of the king. The first time, Raleigh, his family and his servants were kept in the prison for 12 years.

After being released for two years, Raleigh again was imprisoned in the Tower again before being beheaded on Oct. 29, 1618.

King Henry VIII also sent two of his wives, Anne Boleyn and Catherine Howard, to the Tower before their heads were chopped off on the Tower Green.

To decrease the odds of the birds leaving, the ravens have all had their wings slightly clipped. That allows the birds to escape the foxes that like to roam the grounds at night. But the loss of feathers also keeps the ravens from flying away.

To keep them safe from foxes, the ravens are rounded up each night and kept in cages. Knowing that they are going to be fed makes the well-trained ravens happy to report to their caged homes each night.

That makes the ravens the only prisoners left in the Tower of London.