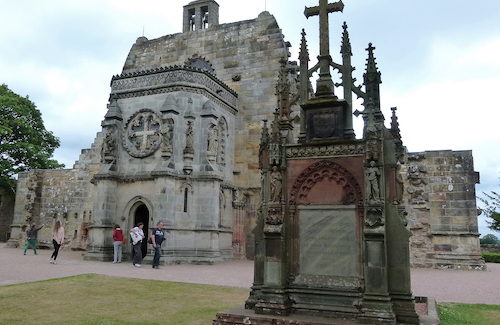 The beautiful chapel was crumbling to the ground. Gaping holes in the roof allowed the elements to take over. Huge vines grew up the pillars and over the ornate carvings. It seemed the historic chapel was destined for destruction.

Until “a miracle” saved it. Through the magic of Hollywood, a movie was released based upon a popular book. The chapel played an integral part in the film.

Suddenly, folks who saw the movie wanted to visit the once-elegant chapel about 5 miles outside Edinburgh, Scotland. Admission fees paid by visitors worked wonders to repair and restore the chapel that was once in danger of being lost forever.

A tip – if you are “hankering” to visit this glorious destination, a cruise is definitely the best way to do it. My tour was part of a Viking Sky cruise. We boarded a comfy bus that morning and drove to the chapel, stopping at a distillery along the way. Then we returned to the ship to cruise on to our next lovely destination.

Another tip – as might be expected, this chapel, the book and the movie all have mystical religious stories. Maybe true. Maybe not. But it is a quest that has been going on since the times of Christ.

Don’t look at the answer below until you’ve formulated your own response. Congratulations, if you are correct. You must be a Dan Brown expert. Or maybe you have visited this scenic spot in person.

If you didn’t know the answer, you might want to check out the book and movie or, better yet, book a cruise to this marvelous destination.

The movie and book, of course, are “The DaVinci Code.” Dan Brown wrote the book. Tom Hanks starred in the movie.

Back in the Middle Ages, it was believed that a rich man could buy his way into heaven. All he had to do was build a magnificent place of worship and give money to the church.

“That was to make sure he was in God’s good books,” says tour guide Gail. “That way he could escape purgatory or hell and go straight to paradise.”

That is what Sir William St Clair, the third Prince of Orkney, decided to do in 1446. For almost 40 years, he oversaw and funded work on what would become the beautiful Rosslyn Chapel in Roslin, Scotland, about 8 miles from Edinburgh.

“It’s like the Bible in stone,” Gail says. “It is so rich in imagery because most people back then were not literate. They could look at the carvings and see the stories instead of reading them.”

For example, the image of a young man with a gaping wound above his right eye and the carving of an older man’s face on the other side of the chapel illustrate the tale of the master carver and his apprentice.

“William St Clair had seen an exquisitely carved pillar in Rome and decided he wanted one in his chapel,” a guide inside the chapel says, using a red light to point out carvings as she talked. Photos are not allowed inside Rosslyn Chapel.

The master carver looked at the drawing of what St Clair wanted and thought he had better go to Rome to see the pillar before undertaking such a difficult task. However, while the master was gone, his apprentice had a dream and carved a spectacular ornate pillar himself, much to St Clair’s delight.

“When the master carver returned, he was filled with anger and jealousy,” the guide says. “He hit the apprentice in the head with his mallet and killed him.”

The master carver was found guilty of murder and executed. However, as further punishment the two carvings were erected in the chapel. “Now for all eternity, the master carver has to look at the apprentice’s column,” the guide says.

However, Sir William’s plan to have the chapel built in the form of a cross with a lofty tower in the center was never completed. He died in 1484 and was buried in the chapel.

Years passed. The Reformation swept Scotland. The chapel fell into disrepair. Then a strange thing happened. In the 18th and 19th centuries, Romantic writers and poets discovered the forlorn chapel. “Sir Walter Scott and Robert Burns came to visit and wrote about it which made even more people come and see it,” Gail says.

Sir Walter Scott wrote “The Lay of the Last Minstrel,” a poem about the intriguing legend that the chapel appears as if on fire the night that a Rosslyn baron dies.

William Wordsworth visited twice, once sheltering from a storm in the chapel, inspiring him to wrote the sonnet “Composed at Roslin Chapel During a Storm.”

Queen Victoria and Prince Albert famously visited Rosslyn Chapel on Sept. 14, 1842, and Queen Victoria was so moved by its decaying beauty that she expressed a desire “that so unique a gem should be preserved” for future generations.

However, time marched on and continued to take its toll on Rosslyn Chapel. Maintaining such an ancient structure is very expensive and the money wasn’t there.

Then what the guide calls “a little miracle” happened. In 2003, a book by a man named Dan Brown was published, “It was called ‘The DaVinci Code.’ People from all over the world came to see the Rosslyn Chapel that he had written about,” the guide says.

In 2006, a film about the book was released. “Now our chapel is famous,” the guide says.

She added that admission fees and souvenir sales have funded a much-needed new roof, modern heating system and other repairs, along with building a state-of-the-art visitors center with visual aids telling the chapel’s story, plus restrooms, a gift shop and a small coffee shop.

“When I decided to write ‘The Da Vinci Code,’ I knew that its finale would have to take place at the most mysterious and magical chapel on earth – Rosslyn,” Dan Brown once wrote.

In the story, hero Robert Langdon – played by actor Tom Hanks in the movie – is searching to unlock the mysteries of the Knights Templar and legends of the Holy Grail.

According to legend, the treasure of the fabled Knights Templar is stowed in a still-deeper vault inside the Rosslyn chapel whose entrance is sealed off by a stone wall.

Some say that treasure is the Holy Grail – the cup from which Christ drank at the Last Supper. Others say it is sacred scrolls or a fragment of the cross on which Christ died or the Ark of the Covenant or even the head of Christ. Still others think it is proof that Jesus and Mary Magdalene were married and had children.

Who knows what secrets are buried at Rosslyn Chapel. If any. But it is heartening to think of all the people who have helped save the magnificent structure every time it seemed on the verge of destruction.