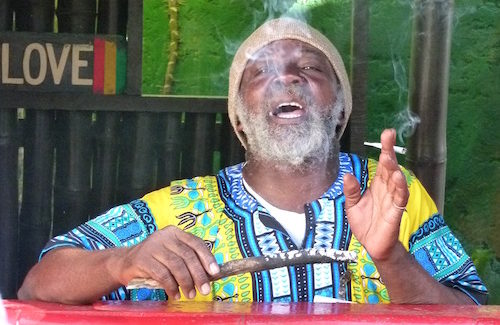 Ready for a bit of musical trivia? This performer has been dead for 40 years but his legacy still lives on in the 104 songs and 21 albums he recorded.

His birthplace and mausoleum are a popular tourist spot. In the photo, my tour guide is taking a smoke break.

For a tip, this musical legend often sang of love and was an advocate of ganja. Getting to his birthplace and mausoleum is a bit tricky, a rough mountainside drive. It’s best to take the tour as I did on a shore excursion from a Carnival Sensation cruise.

Don’t look at the answer below until you’ve formulated your own response. Congratulations if you are correct.

If you didn’t know the answer, you might want to book a Carnival cruise and visit this hillside place yourself.

The answer is Jamaica’s favorite son, Bob Marley, who famously once said, “My music will go on forever.” Four decades after his death, he seems to be correct.

Myths often surround beloved performers. But late reggae superstar Bob Marley seems to have even more conflicting stories swirling around him than normal.

Hoping to find the truth, I signed up for a guided tour from a Carnival Sensation cruise to Marley’s birthplace in Nine Mile, Jamaica. Indeed, my tour pointed out some truths but it also added even more Marley stories that have never been verified. And probably never will be.

It is true that Marley died 40 years ago at age 36 from skin cancer. His family, however, believe the reggae superstar was actually poisoned for his outspoken beliefs.

Some say he never knew his father. Others say the Englishman who died when his son was 10 played an important part in the future musician’s early life.

“You hear so many things about Bob Marley and many of them aren’t true,” says guide Gary Dalling as we headed off on the Bob Marley Bus Adventure from Ocho Rios. “On this tour, we are going to try to set the facts straight.”

“That,” Gary says, pointing to a large photo shellacked inside our van of a stern-faced man wearing a dress shirt and tie, “is Bob Marley’s father. That is the truth.”

Lasting almost six hours, the tour turned out to be quite a trip. In fact, it was almost two tours in one. First, it gave a glimpse of Jamaica that many visitors never see. Second, it shared an in-depth look at the life of Jamaica’s famous son.

Limited to about 25 people, our group climbed aboard the colorful bus plastered everywhere with pictures of Bob Marley. Before we even left the parking lot, bus driver Alan handed us complimentary rum drinks through the bus windows. Strong on the rum.

We were quickly on our way with Bob Marley music blasting from a strong PA system and our guide overriding the music to point out landmarks or share interesting info.

“When Bob Marley was singing all these love songs, people said he was getting soft. So he wrote this song,” Gary says, hitting “I Shot the Sheriff” as our bus bumped along.

I don’t know why but the singer is seldom referred to as Bob or as Marley in Jamaica. In fact, almost everyone I encountered on this tour called him Bob Marley or superstar legend Bob Marley.

Drive not for the squeamish

The first part of our trip was a thrilling ride into the mountains. The “roads” are more like zigzag cow paths. The higher we went, the rougher and narrower they got.

“If you are afraid of dying, don’t look down,” Gary warns at one point.

In Jamaica, they drive on the opposite side of how Americans drive. “The right side is suicide in Jamaica,” Gary reminds.

Pulling a little string to blare a horn, the bus driver barreled safely ahead leaving a cloud of dust and noisy horn blasts.

We entered Nine Mile in St. Ann Parish – the birthplace of Robert Nestor Marley on Feb. 6, 1945. “His father was 50. His mother was 18,” Gary says. “His father had two women here, one in Kingston. He didn’t stay with Bob Marley’s mother.”

As our bus pulled into a high-fenced compound run by the Marley family, Gary alerted us that vendors would try to sell us marijuana and other pot paraphernalia as soon as we stepped off the bus. And we were not to bring it back on the bus.

After we went through the obligatory over-priced gift shops to a restroom where the toilets wouldn’t flush, we met our guide Fozzie.

A small museum contained some of Bob Marley’s gold records and other awards, plus a guitar. After a steep climb to the top of a hill (this is not a tour for anyone with mobility problems), we saw the Rasta-colored stone pillow on which a young Bob Marley lay his head when seeking inspiration.

Inside the tiny two-room shack was the “single bed” he sang about, the place where Marley spent the first 13 years of his life.

Two mausoleums are on the hill – one is the final resting place of Bob Marley’s mother, the other is where Bob Marley is entombed.

A jogger and fitness devotee, Bob Marley injured his toe playing soccer in 1977. When it wouldn’t heal, he went to a doctor who said the singer had malignant melanoma – skin cancer. The doctor recommended amputating the toe.

Although his medical records were never made public, Bob Marley did not have the amputation and by the end of 1980, his health began deteriorating at an alarming rate.

While performing in September 1980 in New York, he collapsed on stage. The untreated cancer had spread to the rest of his body, including his brain.

Bob Marley underwent controversial last-minute treatment in Germany from a holistic physician who, the family said, poisoned the singer. But the reggae star soon realized his cancer was terminal and he wanted to return home.

On the flight from Germany to Jamaica, his condition became so critical that the plane had to land in Miami. On the morning of May 11, 1981, at Cedars of Lebanon Hospital in Miami, Bob Marley died.

The stone mausoleum where he is entombed with his red Gibson Les Paul guitar is filled with candles, photos, notes, flowers and other mementos from fans. The singer left a dozen or so children from six or seven different mothers.

The controversy didn’t end with Bob Marley’s death. Even the guitar that rests in Marley’s mausoleum is disputed. Some say it is a Fender Telecaster and that the Gibson is in a museum. Fozzie, however, is emphatic that the guitar resting with Marley is his beloved Gibson.

Bob Marley died without a will, which spawned court actions for years. The ownership of Bob Marley’s body also was disputed. Several years ago, his widow Rita wanted to move his body from Jamaica to Ethiopia where she lived.

“The Jamaican government stepped in and said his body couldn’t be moved because Bob Marley is a national treasure,” Fozzie says.

A strong advocate of freedom and “One Love” for all people, as well as a famed ganja smoker, Bob Marley left behind a lasting legacy and a wealth of music – 104 songs and 21 albums.

I don’t know what the poor boy from the slums of Jamaica whose estate grew to the millions would think of the massive mausoleum and all the people who are making money off him, his life and his death.

Those words also are disputed. Maybe the truth about this reggae superstar is buried somewhere in all the untruths. And it might not matter anyway.

Bob Marley lived. He died. And his legions of loving fans keep his music, message and memory alive.