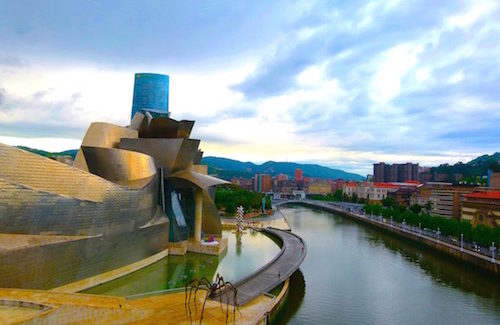 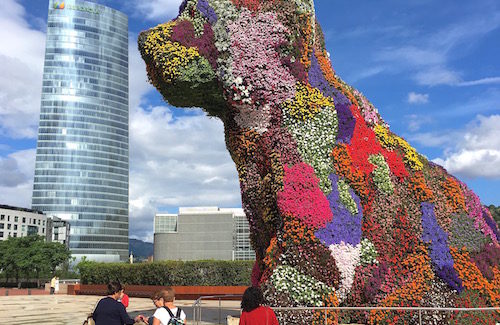 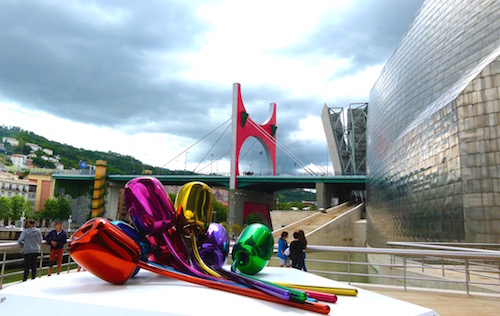 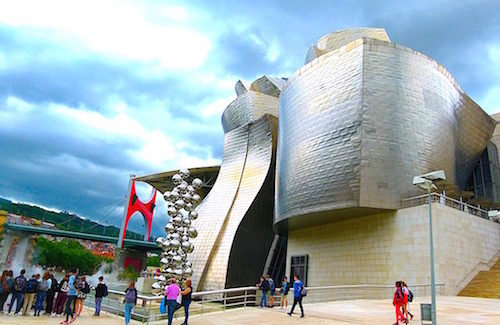 Like a silent sentry, the gigantic “Puppy” stands ready to welcome visitors to his beautiful home. Multiple cameras and cellphones snap pictures of the unusual dog sculpture. In fact, it is difficult to get a photo when someone isn’t posing near the Bilbao landmark.

But it wasn’t so long ago that travelers shunned this historic city in northern Spain.

“If you didn’t see the way Bilbao used to be, you wouldn’t believe it,” said Mikel Mugalari of Tours by Basques. “It didn’t look like this at all.”

Chartered in 1300 along the Bay of Biscay, Bilbao grew slowly but steadily with a strong economic base built on shipbuilding, steel and chemical industries. At the beginning of the 20th century, Bilbao was said to be the wealthiest city in Spain.

Then the bottom fell out.

When the steel and shipbuilding industry floundered and industrial decline set in, Bilbao was hit with a deep economic crisis. The once-bustling waterfront became derelict. Decades of industry had left the city grubby and polluted.

Bilbao was the pits.

For some cities, that might have been a death blow. But Bilbao turned the tide.

“What happened was the Guggenheim,” Mugalari said. “It is what changed Bilbao.”

Opened in October 1997, the Guggenheim Museum Bilbao was designed by Frank Gehry and cost an amazing 130 million Euros paid for by the Basque government.

“We were in the middle of a crisis,” said Guggenheim Museum guide Itziar. “Some people thought it was crazy to spend that much money. But it worked.”

How in the world did Bilbao officials convince the renowned Guggenheim to build in their city and to have famed architect Frank Gehry do the design?

“It was a risky business when the revitalization efforts got started in the 1990s,” Itziar said. “We needed an important cultural facility so we got in touch with the Guggenheim and with Frank Gehry.”

Surprisingly, both the Guggenheim and Gehry decided to do the project. “Why Bilbao instead of Paris or London or Athens?” Itziar asked. “Frank Gehry himself came here and said, ‘This is the place, next to the river.’”

The location was ideal, she added. “The river was the reason Bilbao exists so it just seems right that we are honoring the river again. It reminds us of our tradition to the sea,” Itziar said.

Now a popular cruise ship shore excursion, the museum’s exterior is dazzling as is the artwork surrounding it. The iconic Puppy floral sculpture was created by Jeff Koons. The 43-foot-tall living plant creation was modeled after a West Highland terrier and changes according to the time of year and the blooming plants, including colorful marigolds, begonias, impatiens, petunias, and lobelias.

An eerie spider creeps nearby. Named “Maman” – the French word for Mother – the sculpture by artist Louise Bourgeois measures more than 30 feet high and 33 feet wide with a sac containing 26 marble eggs.

“The spider is a tribute to her mother, both protector and predator,” Itziar said, adding that the spider’s silk is used both to construct cocoons and also to bind prey. The artist’s mother was a weaver.

Inside the Guggenheim are soaring outer galleries plus a suite of 10 galleries in the building’s core that house a permanent collection of works by world masters like Matisse, Picasso, Chagall, Andy Warhol, Robert Motherwell, Paul Klee, and Roy Lichtenstein. The structure was created to make maximum use of natural light.

Following the success of the Guggenheim, other major projects took place and many of the world’s best architects joined in – Santiago Calatrava, Arata Isozaki, Norman Foster, and Philippe Starck among them. An exemplary new metro system was added.

“The Guggenheim was the engine for the transformation of the whole city,” Itziar said.

With the Guggenheim as a major draw, visitors discovered the new splendor of Bilbao. Within four years, the cost of the project had been recouped and the economic impact continues to be huge. More than a million people a year now visit the museum.

Thankfully, visitors also find that the old Basque soul of Bilbao is still alive and well. Historic architecture blends seamlessly with new. Traditions are honored and visitors are attracted by both the old and the new.

Cruise Trivia: Name this Famous Building and the Architect Who Designed it