Expedition cruisers are soon going to have a new cruise ship for their adventures. Viking has now “floated out” its second expedition ship. Set to debut in summer 2022, Viking Polaris has met water for the first time.

“We are one step closer to our launch of ‘the thinking person’s expedition’ with new voyages that will allow our guests to explore the ends of the world and closer to home – in comfort,” Torstein Hagen, Chairman of Viking, said in a news release.

The float out is significant because it denotes a ship moving into its final stage of construction. The ship has now been moved to a nearby outfitting dock for further construction and interior build-out.

After final outfitting, Viking Polaris will be delivered at Fincantieri’s VARD shipyard in Soviknes, Norway. 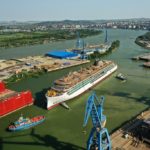 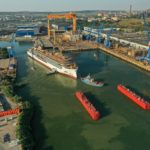 “We are grateful for our long-standing partnership with Fincantieri, who has helped us build the world’s most beautiful ocean ships and are now helping us perfect expedition cruising,” Hagen says. “We look forward to welcoming guests on board Viking Polaris and Viking Octantis next year.”

Viking Polaris’ identical sister ship, Viking Octantis, was floated out last December and is set to debut in early 2022 for journeys to Antarctica and North America’s Great lakes.

Esteemed explorers Liv Arnesen and Ann Bancroft will be honored as ceremonial godmothers to Viking Octantis and Viking Polaris, respectively. Arnesen, a native Norwegian, became the first woman in the world to ski solo and unsupported to the South Pole in 1994.

Bancroft is the first woman to successfully ski to both poles. Arnesen and Bancroft also became the first women to ski across Antarctica in 2001. Together, they co-founded Bancroft Arnesen Explore / Water Access, an initiative that aims to engage and empower more than 60 million minds to create a sustainable tomorrow.

The new Polar Class 6 Viking Octantis and Viking Polaris will host 378 guests in 189 staterooms. The ships are built small enough to navigate remote polar regions and the St. Lawrence River, while large enough to provide superior handling and stability in the roughest seas.