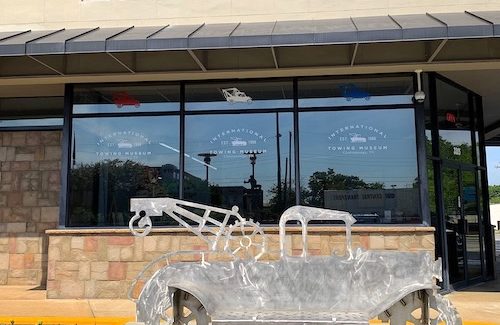 In 1916, while steering a Tin Lizzie over a bumpy road, a Chattanooga motorist took a sharp right when he shouldn’t have and helped create a major invention.

When the dust cleared, John Wiley and his son found themselves unhurt. Their car, however, was submerged in the Chickamauga Creek. Only one wheel poked above the water.

When he got to the nearest phone, Wiley called Ernest Holmes, a former student from his business college who now operated a garage and automobile repair shop. Holmes feared it was a hopeless cause, but the ingenious scheme he came up with worked.

Using three poles, a pulley and a chain hooked to the frame of a 1913 Cadillac, Holmes pulled the vehicle back up on the road. From that, the Wrecker King was born.

With more and more horseless carriages chugging along the nation’s road, Holmes foresaw a need for handling wrecked and disabled vehicles. In the fall of 1916, the Chattanooga man patented the first wrecker in the U.S. That tale is recounted at the International Towing Museum, located about three miles from where the Holmes repair shop was once located.

“To me, it’s an amazing story,” said Cathy Brumgard, museum general manager. “He knew there had to be a better way but how in the world did he know how to do it?”

Before that, when a vehicle was in trouble, Holmes would round up six or eight men to go along with him and they would hand pull the automobile back on the road, Brumgard said. “As automobiles became more prevalent on the landscape, there was more need than ever and Ernest Holmes was the man who figured out a way to meet that need.”

Before long, Holmes was sending his wreckers to all parts of the globe, including the Indianapolis Speedway. During World War II, Uncle Sam bought almost 7,000 of the mechanical monsters.

Today, manufacturers of wreckers and towing equipment abound and it’s a rare motorist who has never had need of one. In 2020, the industry has grown to $7.5 billion in the U.S alone. And that was in a pandemic year when vehicle traffic was severely curtailed.

At the museum, visitors can see all kinds of spiffy wreckers and towing equipment. “We have 23 vehicles fully restored,” Brumgard said. “We own several, several have been donated and some are on loan. Almost all of them are drivable.”

Of course, the wreckers in the museum are not the typical banged-up, paint-skinned trucks most motorists encounter on the road. A green 1929 Chrysler with a Weaver 3-ton auto crane sparkles from its protruding headlights to its glistening black tow hook. Its gold-rimmed tires look as though they have never seen a spot of dirt.

Then there’s the 1936 Chevy truck emblazoned with the notice, “It’s a Dirty Job but Someone has to do it.” The wrecker is waxed to the max.

Founded in 1986 by the Friends of Towing, the museum started as a traveling collection of towing memorabilia that was displayed in a semi-trailer at towing and recovery industry trade shows. In 1995, when it came time to settle on a permanent location, the organization chose Chattanooga since it is honored as the birthplace of the tow truck, thanks to Ernest Holmes.

The museum also includes the Towing & Recovery Hall of Fame to honor people who have in various ways significantly advanced the industry. “Each year in October we add new members, except for 2020 because of the pandemic,” Brumgard said. The Hall of Fame currently has 368 members from 17 different countries.

The museum attracts visitors from around the world, Brumgard said. “And we get visitors of all ages. We have a little children’s section where children can play with toy trucks. A grandmother just brought her grandson here for his birthday.”

A popular photo spot is a colorful replica tow truck named Tater Tot where visitors can climb in and pretend as they operate the boom and lights. “Tater Tot is a kids’ favorite but also an adult’s favorite,” Brumgard said.

“Tater Tot is right outside my office and I’ll often hear a bunch of laughing out there. When I look out my door, it’s adults sitting in Tater Tot and waving for their photos.”

For more information: Contact the International Towing Museum at (423) 267-3132 or go to www.internationaltowingmuseum.org. 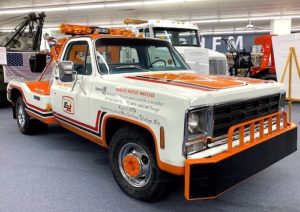 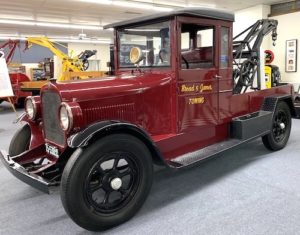 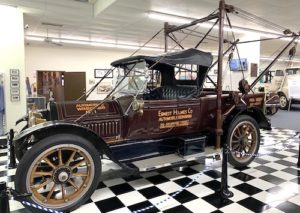 A replica of the 1916 Holmes wrecker is displayed at the museum. Photo by Jackie Sheckler Finch

New Carnival Celebration to be part of 50th birthday festivities