The Chickens of Key West 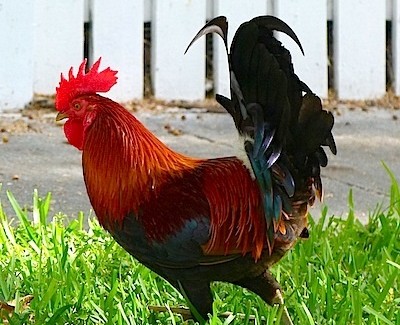 KEY WEST, Florida – He strutted down the street like he was cock of the walk.

“He’s beautiful. And he knows it,” a woman said, watching me try to take a photo of the confident rooster.

I think she was right. Perhaps this preening critter knew that he was a popular sight on cruise ship stops and that he could come and go as he pleased – protected by the laws of Key West.

A bartender along Duval Street told me that the scrappy little birds wandering the streets, yards, taverns, restaurants and everywhere else in this Florida community are descendants of ferocious fighters.

Even more chickens came when thousands of Cubans fled to Key West in the 1950s as a result of the Revolution. However, cock fighting was outlawed in the 1970s and many of the no-longer-wanted birds were turned loose. With easy access to meat and eggs in supermarkets, the backyard “grocery stores” were no longer necessary so those chickens also hit the road.

With few predators on the island (except hawks and feral cats) the “wild” chickens thrive on a diet of native insects and lizards. Several generations later, it is estimated that between 2,000 to 3,000 of these birds still roam freely throughout the island.

Although tourists like the colorful birds – and local artists have capitalized on that with chicken paintings, T-shirts, ceramics and even chicken jewelry – many locals are weary of the marauding creatures. Whoever thought roosters only crow loudly at the break of dawn is sadly mistaken. Passing headlights, flashing porch lights or any disturbance can set a rooster off on a loud concert long before daylight. Warnings from awakened sleepers to “shut up” seem to increase the crowing even louder.

The birds annoy homeowners by scratching up yards, flowerbed and vegetable gardens and by leaving “little gifts” on cars and lawn furniture. Territorial mother hens can seem a bit scary to unaware strollers. The chickens are regarded by some as a nuisance and a danger to public health.

But efforts to control the “invasive species” have met with strong opposition in notorious live-and-let-live Key West. To me, the scurrying chickens and preening roosters are a colorful part of the fabric of this unusual cruise stop.

Cruise Ship Trivia: Can You Name the Godmother of the Royal Princess?

Cruise Trivia: Can you name the American Queen godmother? Hint: This godmother once lived in a graceful Memphis mansion.