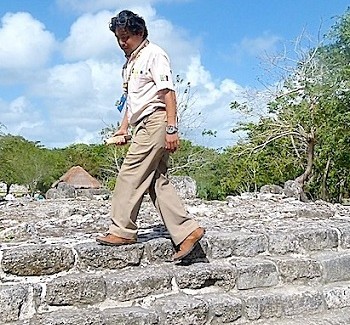 The Mayans came from outer space. Or the Mayans were visited by aliens who shared extraterrestrial intelligence to create an advanced civilization on earth.

“Some people believe that,” says guide Alex Cab. “But neither one of those things is true.”

Nor is it true that Mayans no longer exist.

“I’m a Mayan,” Alex says. “You can’t say that the Mayans are all dead because I’m still here. I am of mixed blood but I am a Mayan. It is the Mayan culture, civilization and knowledge that has disappeared. That is gone.”

Part of the pleasure of a cruise is the many shore excursions that can be taken when a ship is in port. When our ship docked in Cozumel, we had a choice of 35 organized trips, plus the option of walking off the ship and visiting Cozumel on our own.

We picked the San Gervasio Mayan Ruins & Discover Mexico Cultural Park tour at $59. I’ve visited the Mayan ruins at Chichen Itza and Tulum and enjoy hearing about the mysterious civilization so was looking forward to seeing what San Gervasio was like.

To begin our four-hour tour, we walked from the ship and met our guide Alex who took us to a comfortable air-conditioned shuttle bus. The 35-minute ride to San Gervasio  is a good way to get an overview of Cozumel with Alex giving entertaining and informative commentary.

The island of Cozumel was considered sacred by the Mayans who lived here for hundreds of years, starting in 300 A.D. “We aren’t sure where the Mayans came from, why they settled here or why they left,” Alex says. “But we do have some good theories.”

One of the most accepted theories is that the Mayans came from Mongolia, north of China.

“Some of our features are the same as the Mongolians. We have no facial hair. Since we have mixed blood with the Spanish, we do have some facial hair now,” Alex says. “We are born with a blue green birthmark at the base of our spine. The birthmark disappears at about age 8, 9 or 10. The Mongolians have it, too.”

Surrounded by a forest, San Gervasio was the island’s capital and Mayan ceremonial center. “The Mayans believed in many gods and goddesses. They worshipped natural forces,” Alex says. “The  temples here were where they worshipped Ixchel, the goddess of the full moon.”

Most of the stone structures at San Gervasio now lack roofs and upper portions of walls but it is still easy to see how they must have been. The grounds and ruins are well kept with plaques describing each structure. Only about one-fourth of the site has been excavated and developed. Future plans are to open up the remaining area.

When we came to a pyramid-looking building, Alex answered a question that many of us might have had. Since the steps leading up to the top of the building were so narrow and since the structure doorways were so low, the Mayans must have been midgets with teeny feet.

Not so, Alex said, walking up the pyramid steps by carefully placing his feet sideways instead of lengthwise. By walking that way, a Mayan would not turn his back to anyone behind him or in front of him. Stooping over to enter a building, a Mayan would have looked as though he were bowing reverently – even if he had forgotten or didn’t want to.

“It was all about respect,” Alex said. “It was a way to force them to show respect.”

As for why the Mayans left the area and where they went, Alex said no one knows for sure.

“Perhaps there was a drought,” he says. “Agriculture was the base of economy and without enough food or water the Mayans may have started abandoning their big cities and moving away.”

The arrival of the Spaniards didn’t help the Mayans either, Alex adds. “The Mayans were already in a decline but the Spaniards brought smallpox and TB which killed many Mayans.”

The Spanish sickness ran rampant across the island. There have been three mass graves discovered at San Gervasio where smallpox victims were buried, along with glass trade-beads given to them by the Spanish.

The Mayan calendar is just one example of the advanced development of the Mayan civilization. “It has been found to be within a tiny fraction of a second’s match to NASA’s scientific measure of time,” Alex says.

As for the end of the world that was proclaimed would happen on Dec. 21, 2012, because it was prophesized in the Mayan calendar, Alex just laughs.

“You will never see the words ‘end of the world’ in any Mayan prophecy,” he says. “The Mayans never believed that the world would end. They believed they would just start a new cycle of life.”

The Land Of Waterfalls