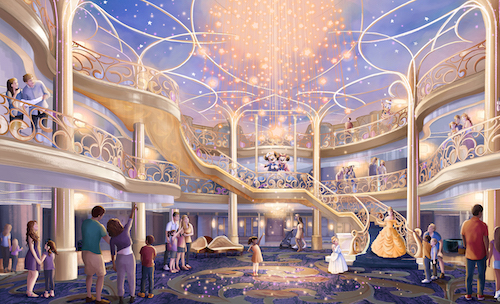 Remember Jiminy Cricket’s words, “When you wish upon a star, your dreams come true.”  Well, cruisers are now going to be able to have dreamy cruises on the new Disney Wish. 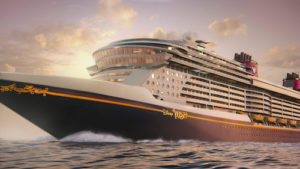 The Disney Cruise Line fleet has the most beautiful ships at sea and the Disney Wish, setting sail in early 2022, will be no exception. This rendering depicts the magnificent exterior of the fifth Disney ship that will elevate family cruise vacations to a whole new level. (Disney)

The first of three new Disney Cruise Line ships, the Disney Wish will debut in summer 2022. And the ship will have a distinctly Disney design concept unlike anything at sea.

“Enchantment is about unlocking the wonder in everything we do and experience,” Laura Cabo, portfolio creative executive with Walt Disney Imagineering, said in a news release.

“For the Disney Wish, we are creating a signature design language that exudes this emotional magic with more Disney stories and characters than ever before,” Cabo said.

Found at the heart of so many beloved Disney stories, the motif of enchantment is the architectural and thematic foundation of the ship’s design. It will weave imagination, emotion and adventure into the very fabric of the vessel’s unique personality.

“The Disney Wish will be a place where families really do get to wish upon a star,” Cabo said.

The Disney Wish will continue the Disney Cruise Line tradition of incorporating an elegant, classical exterior design – a tribute to the golden age of cruising – in the emblematic colors of Mickey Mouse. 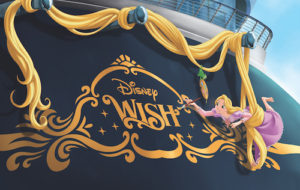 A beloved hallmark of Disney Cruise Line, it has been a tradition to adorn the back of Disney ships with an iconic character that reflects the theme of each vessel. The Disney Wish’s stern will feature Rapunzel. Our favorite artsy princess, paintbrush in hand, uses her enchanted hair to suspend herself as she decorates the stern of the ship with the help of her feisty sidekick, Pascal. (Disney)

A hallmark of Disney Cruise Line is the adornment of two character art pieces on the hulls of each ship. For the Disney Wish, elegant filigree artwork on the bow – an intricate scrollwork reminiscent of the classic ocean liners of the 1930s – will feature Captain Minnie Mouse for the first time, solidifying her pioneering place at the forefront of the fleet’s future.

The stern of the Disney Wish will boast a custom sculpture of the optimistic and adventurous Rapunzel. Suspended by her golden tresses, this artistic Disney Princess will appear to be “decorating” the exterior of the ship with her trusty paintbrush and the help of her chameleon pal, Pascal.

To take it one step further into enchantment, Imagineers have added a whimsical curvature to the deck edge along both sides of the Disney Wish, which will create a sense of magic and visual movement both inside and out.

The Disney Wish is the first of three new Disney Cruise Line ships to be built at the Mever Werft shipyard in Germany through 2025. All three ships will be slightly larger than the Disney Dream and Disney Fantasy.

On the Disney Wish, passengers will be cruising on a castle on the seas. The Great Hall will welcome guests as they first step on board. The fairytale castle-inspired atrium is touched with Gothic, Baroque and French Rococo influences.

The Grand Hill will be an enchanted realm where glittering trails of pixie dust climb majestic three-story columns, spill across the ceiling and animate the shimmering chandelier above with an effusive burst of magic.

The Grand Hall chandelier is the manifestation of wishes come true – a swirling spiral of crystal gems punctuated with light, its crown jewel a wondrous wishing star.

At the base of the grand staircase, beneath the glow of the wishing star, will stand the personification of wish fulfillment herself – Cinderella. A pillar of The Walt Disney Company’s legacy, Cinderella’s story is the epitome of magic transforming wishes into dreams and dreams into reality.

Cover photo: The three-story atrium of the Disney Wish will be a bright, airy and elegant space inspired by the beauty of an enchanted fairytale. It will serve as the gateway to an unparalleled vacation filled with experiences designed especially for families. (Disney)