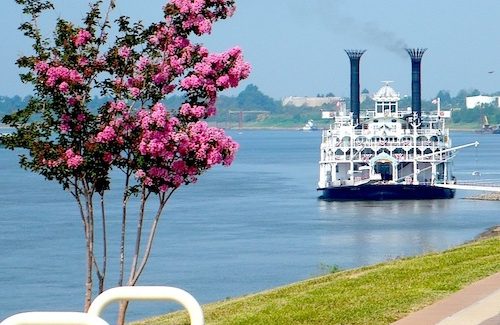 When I was a little girl, my Dad told me about the great New Madrid earthquake. It was so bad, he said, that the mighty Mississippi actually flowed backwards.

I wasn’t sure if that was true or if Dad was just regaling me with a tall tale. Of course, it actually was true. And it happened in New Madrid, Missouri.

In a “small world” adventure, when I grew up I visited New Madrid on an American Queen riverboat cruise. At the New Madrid Historical Museum there, I heard the actual story and how devastating that earthquake was.

The river town’s name is tied forever to that tragedy. New Madrid was at the epicenter of a seismic shift 200 years ago so violent that the Mississippi appeared to run upstream.

To learn more about earthquakes, the New Madrid Historical Museum is a great place to start. Be sure to walk across the street and get your picture taken at the New Madrid Fault Line. 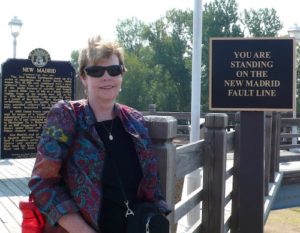 Founded in 1788, the town was strategically located just below the Mississippi and Ohio rivers. Named New Madrid, it was meant to be the capital of “New Spain.” It was a stopping point for thousands of early Americans on their way to what they hoped would be a better life in the new country.

The town was just an outpost when more than 1,000 earthquakes struck the region during the winter of 1811-1812. The strongest quake measured 8.0 on the Richter Scale and reportedly rang church bells as far away as Boston and Toronto.

The first Mississippi River steamboat, the New Orleans, just happened to be in the area during her maiden voyage from Pittsburgh to her namesake city. Passengers onboard reported a strange roar, boiling white waters, geysers of mud shooting out of fields, collapsing riverbanks and entire trees floating down the river.

The ground shifted so violently that portions of the Mississippi River itself near New Madrid actually flowed north briefly as the slabs of earth gyrated and settled.

The earthquake that struck on Feb. 7, 1812, not only completely destroyed New Madrid, it also badly damaged houses and collapsed chimneys as far away as St. Louis. In Kentucky Bend, a phenomenon known as uplift created temporary waterfalls.

Some good did come from the earthquakes, however. Blocked streams backed up and eventually created the fishing paradise of Reelfoot Lake in Tennessee.

What the Earthquake Uncovered

The quake also helped solved a local crime. Thomas Jefferson’s nephews, Lilburn and Isham Lewis, got drunk and murdered a man named George on Dec. 15, 1811. The two murderers hid the body in a chimney.

Without a body, there could be no charges. Six weeks later, the earthquake tremors caused the chimney to crumble, revealing the gruesome evidence.

The brothers were arrested and charged with murder. Lilburne committed suicide. Isham escaped from jail and was said to have gone to Natchez where he fought in the Battle of New Orleans and died in the battle in 1815.

Also at the New Madrid museum, we were given copies of an Earthquake Cake recipe which is moist and high in calories. But as a guest said, “Where an earthquake is concerned, who is counting calories?” 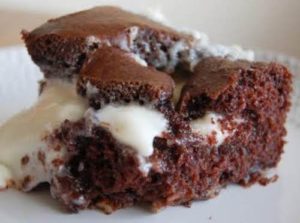 Prepare cake mix as directed on package and pour on top of coconuts and nuts.

Mix softened butter, creamed cheese and powdered sugar together. Drop from spoon in dollops onto cake mix. Do not stir.

Bake at 350 degrees for 40-50 minutes or until tester inserted between dollops comes out clean.

Happy Fourth of July to the USA!