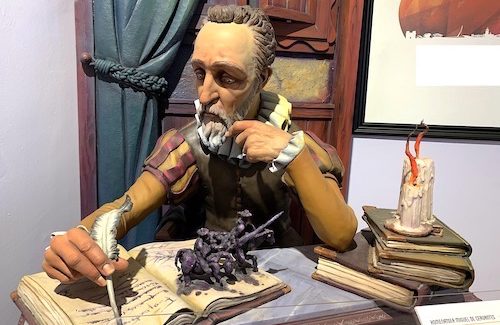 I might have been able to answer the first question correctly. But I’m pretty sure I would have been stumped at the second one if I hadn’t visited the museum a few months ago.

So, what do you think is the name of the man with the quill? A hint – look at the little figures galloping across the pages of the book. Those are legendary characters this writer created.

As to where the sculpture is located, a hint – it is a museum in his homeland, a most popular place especially during special fiery days in March.

Don’t look at the answer below until you’ve formulated your own response.

Congratulations if you are correct. You must be a literary expert. Or maybe a world traveler.

If you didn’t know the answer, you might want to book an ocean cruise to this glorious place to enjoy all the wonders of the city and its famous festival.

The Spanish writer is sitting at his desk using a quill pen to create his famous characters while tiny statues of the Man of La Mancha and his companion Sancho Panza gallop across the pages.

The sculpture is in the Fallas Museum in Valencia, Spain. The museum is home to statues, called ninots, that were created for the annual Fallas festival in Valencia and were saved by popular vote from the festival bonfires.

The whole Fallas (the fires) celebration is unique. It involves bands, pyrotechnics day and night, folkloric dances, parades, paella contests, pumpkin fritter and hot chocolate stands, crowning of the Fallas queen and her court and floral displays, plus about 800 fallas or sculptures.

The lifelike statues are made of papier-mache, cardboard, wood or plaster and often depict bawdy, satirical scenes and current events. Only one ninot is saved from the flames by the vote of celebrants.

The 2020 festival was cancelled due to COVID-19. But the popular Fallas Museum welcomes visitors who yearn for their annual fiesta. The 2020 cancellation is the first time the festival has been suspended since the end of Spain’s 1936-39 civil war. Celebrants are already planning for the 2021 Fallas on the customary dates of March 15-19.

The festival leads up to the feast day for St. Joseph on March 19. The ninots remain in place until March 19th, the day known as La Cremà (the burning).

For La Cremà, young men use axes to chop holes in the statues and stuff them with fireworks. Streetlights are turned off and the ninots are set on fire at midnight.

The origin of the Fallas is a bit unclear. Some say it started when carpenters of the city would clean out their workshops and burn leftover wood during spring cleaning. Carpenters also would burn the wooden stands used to hold the oil lamps they had needed to work during the darker time of the year. Since the festival is held during the season when days are longer and carpenters didn’t need oil lamp light to work, those stinky wooden instruments could be tossed into the fire.

St. Joseph – husband of Mary, the mother of Jesus – is the patron saint of carpenters and his feast day is March 19 which accounts for the burning. Other tales say Fallas is a ritual rooted in pagan times to celebrate the arrival of spring.

For more information on Valencia: Visit Valencia at https://www.visitvalencia.com/en

For general information on Spain: Contact the Tourist Office of Spain in Chicago at (312) 642-1992 or www.spain.info