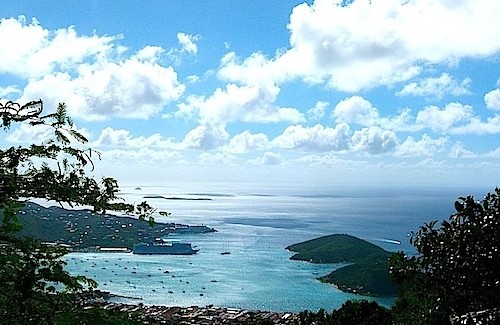 The view was breathtaking. As was the ride to get to the top of St. Thomas Island.

Whenever I return, this will be an island trip I will have to take again. And again.

First, we caught an island shuttle for a winding trip to the top of St. Thomas Island, appropriately named Mountain Top. Our driver “Toothpick” (“because I’m so skinny”) expertly guided the vehicle up the narrow road to the highest peak on the island and gave us a history lesson at the same time.

At least, I think he was joking.

We looked down. Toothpick was sure right. We were so close to toppling over the side of the teeny road that I was glad I wasn’t driving.

Mountain Top boasts a big duty-free shopping mart filled with tons of souvenirs, clothing, jewelry and other stuff, plus a clean restroom and a bar that serves the famed banana daiquiris.

But it was the amazing view that captured my time. Mountain Top is the perfect place for photos. On a clear day, the bartender said, you can see San Juan.

Back on the shuttle with Toothpick, we took a jolting ride down to Blackbeard’s Castle where our driver turned us over to tour guide Jerome. The castle is actually more of a tiny tower and it’s unlikely that Blackbeard himself ever used it. But it was worth a short climb to the tower top to see that it was a great lookout.

Blackbeard’s Castle,  officially known as Skytsborgtarn – meaning sky tower – was built in 1679 and is one of five National Historic Landmarks in the U.S. Virgin Islands. Escorting us into the Rum Factory & Museum, Jerome gave us a quick overview of how rum is made, then turned us loose for free rum tastings and a self-guided tour of other attractions as we walked down the mountain.

Jerome warned us that there are 99 steps to the bottom of the attractions. Sure glad it was all downhill. I would not recommend the walk for anyone with mobility problems or anyone pushing a baby stroller.

Off we went – through a couple of historic homes, gift shops, the Caribbean World Amber Museum, some lovely gardens and a bunch of pirate statues, more than 20 of them said to be the world’s largest collection of life-sized pirate statues.

A Three Queens bronze fountain honors three women – Mary, Agnes and Josiah – who led a rebellion of laborers on Oct. 1, 1878, in a successful demand for better wages and working conditions. If you are not shy, you can bring a bathing suit and swim in one of the pools. The cool water sure looked inviting on this balmy day.

My favorites were the two-story high amber waterfall built using 12,000 pieces of amber from all over the world and the amber wish stone. My sister and I both left wishes. I’m pretty sure our wishes were much alike. We are both mothers, you know.

Entering the Amber Museum was a bit of a surprise. Strolling through a darkened tunnel, we encountered a huge roaring dinosaur. The little boy behind me didn’t know whether to be fascinated or to scream. I think he did both.

The museum has pieces of amber and jewelry for sale. But it also has some interesting fossils of insects and leaves embedded in amber.

An eye-catching 60 million-year-old piece of Baltic amber has an ancient cockroach lodged in it. The roach doesn’t look much different from the yucky pests of today.

An American Feast on the Carnival Glory