Like a little girl on her first day of school, Shelby Guest picked up the Twiggy lunch box and hugged it as though it still contained some delicious childhood goodies.

“I had one just like this when I was a kid,” she says. “This brings back so many memories.”

Such reactions happen all the time at the Lunch Box Museum in Columbus, Georgia, says owner Allen Woodall.

“I wish I had pictures of the faces of people when they come in here,” he says. “They get so excited and some of them even cry … It’s like a time capsule from their past.”

“You can still smell the peanut butter and bananas that were in here years ago. This box made some little kid very happy.”

At one time, Woodall says, picking out a new lunch box for the start of a school year was a big deal. “It said something about you, whatever design you picked. You had to carry it for the whole school year so it was very important to get it right.”

If the choice was a Scooby Doo or a Brady Bunch or a Beatles, it might prove the start of a friendship with someone with similar likes. “Another kid might say, ‘Hey, I like Scooby Doo, too’ and sit with you at lunch.”

Smithsonian once paid a visit

Nestled in the back of River Market Antiques, the unusual Lunch Box Museum has more than 2,000 lunch boxes, thermoses and related items lining its walls. It’s the largest lunch box collection in the world. Even the Smithsonian came to call 15 years ago.

“The Smithsonian got about 20 lunch boxes and thermoses from me,” Allen says. “They wanted the ones with wear and tear … If a kid had actually scratched their name on the box, it made it even more valuable.”

Born and raised in Columbus, Allen started collecting lunch boxes back in the 1980s when metal lunch boxes were outlawed by the legislature.

“A group of moms in Florida got together and went to the state legislature saying that children were using metal lunch boxes as weapons to fight each other,” Allen says. “Pretty soon other states picked up on it, too, and outlawed metal lunch boxes.”

Ironically, the last metal lunch box was a 1985 Rambo featuring Sylvester Stallone holding an AK-47 assault rifle. Of course, that collectible lunch box is in Allen’s museum. But Allen says he doubts that school kids were hitting each other with their lunch boxes.

“Really, I think they were just banging them up so they could get a new lunch box with whatever the newest show was on TV.”

And that was a very savvy marketing ploy, Allen adds. From 1950 to 1990, nearly every school kid in America toted a lunch box. What better way to advertise a TV show or movie or entertainer than to have all these schoolchildren showcasing free ads.

“It’s as though the kids were carrying around billboards advertising a show or an actor,” Allen says, pointing out lunch boxes for “The Addams Family,” “Welcome Back, Kotter,” “Mickey Mouse Club,” “Happy Days,” and many more TV shows.

“You see the size of the picture of Hopalong Cassidy on this lunch box?” Allen asks, picking up a well-loved metal box.

“It looks like the picture is really small but that’s the size of an average TV screen back in 1951.”

Another unusual and valuable lunch box is the 1977 King Kong. On that one, the giant ape was climbing up the World Trade Center instead of the Empire State Building. “After 9/11, the value of that one tripled,” Allen says.

Except for the most valuable lunchboxes which are safely behind glass, visitors are welcome to hold one in Allen collection and reminisce.

“It depends on the person’s age as to which lunch boxes are the most popular,” he says. “If it’s one you had as a child, then that’s the one you like best.”

For Allen, Dick Tracy and the Green Hornet are two of his favorites. “Because that is who I used to listen to on the radio.”

Allen has become such an expert on lunch box history that he wrote a book about it. Titled “The Illustrated Encyclopedia of Metal Lunch Boxes,” his book is a comprehensive and colorful compilation of metal lunchboxes, including a section on how to clean and care for one of the antiques.

“Some women carry the collectible lunch boxes as purses. Some collect only a certain kind. I just collect any I can find,” Allen says.

In fact, if Allen has any duplicates they can be bought by folks who might remember and love them. 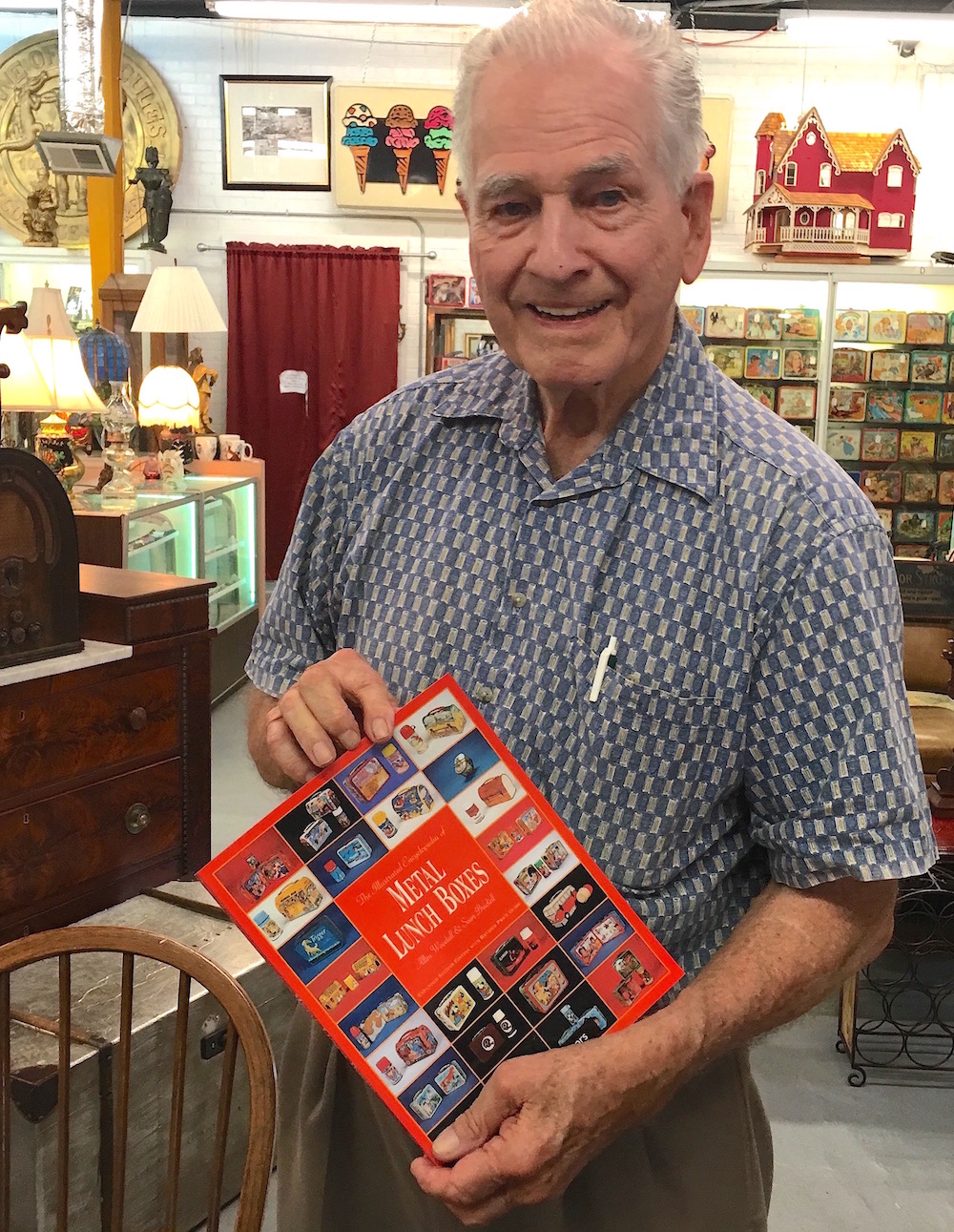 Allen Woodall wrote a book about the history of metal lunch boxes. 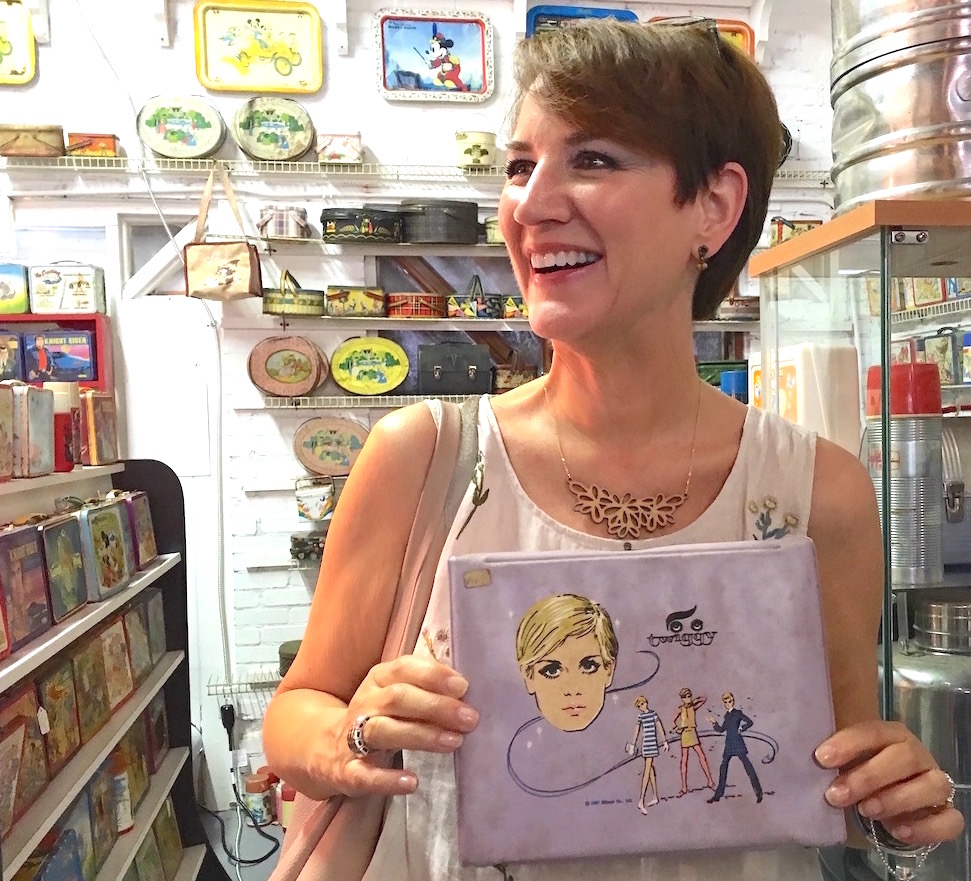 Shelby Guest had a Twiggy lunch box like this one when she was a child. 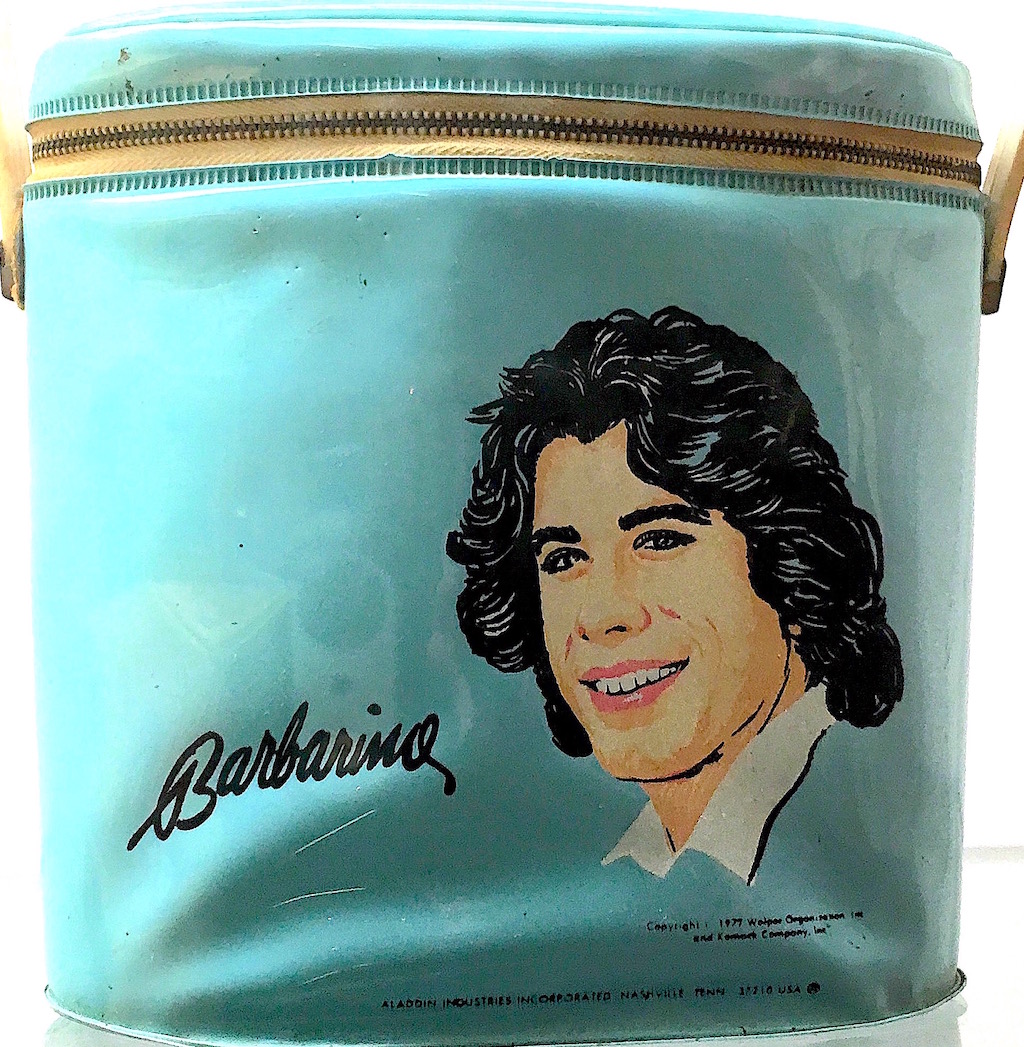 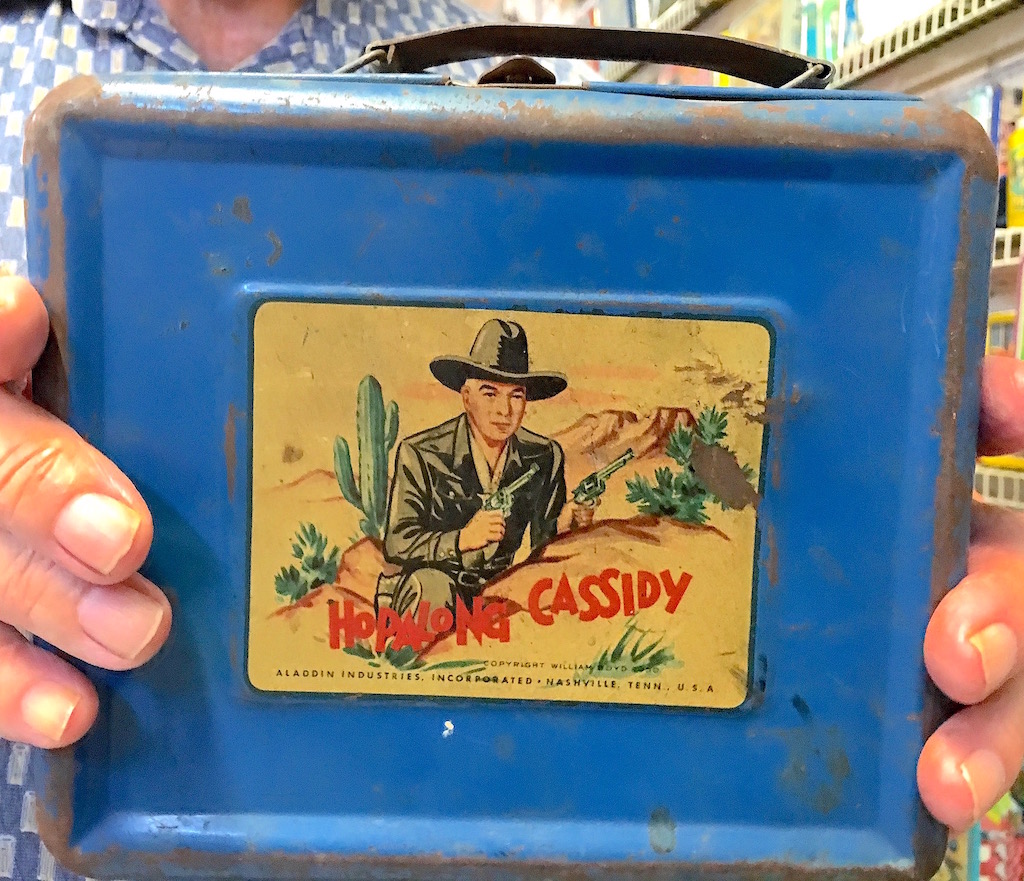 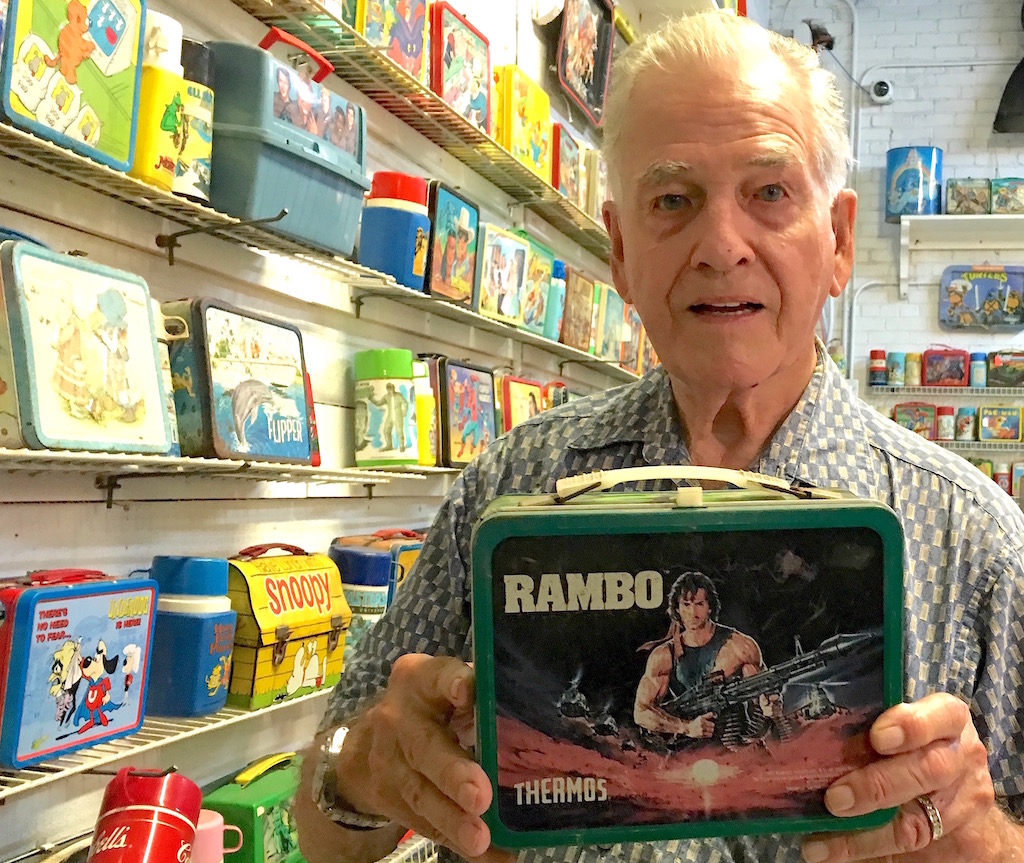 Rambo was the last metal lunch box made. 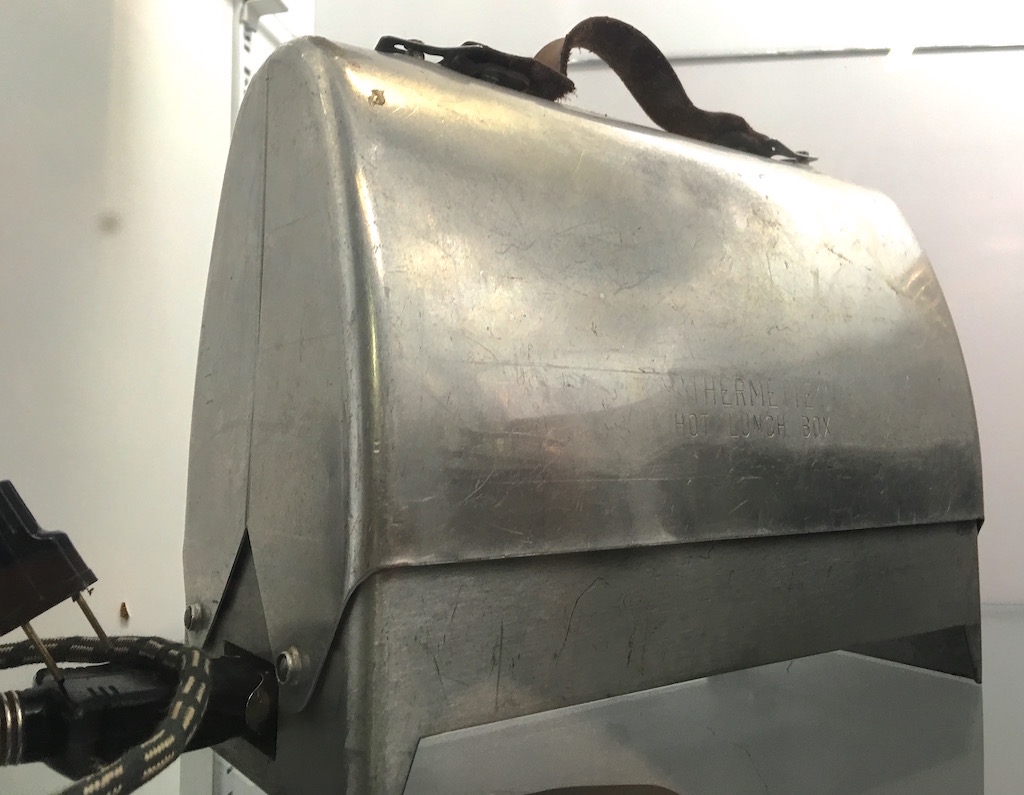 A rare Depression-era lunchbox had an electric plug to heat the lunch.

As Allen notes, the history of lunch boxes goes back many years. Working people would keep their noon meals safe in old metal pails or other industrial containers. In the early 1900s, lunch pails were sold for commercial use and came with matching vacuum bottles.

“The pails were often dome-shaped and not very pretty,” Allen says.

Before long, children wanted to be like their working parents and carry their own lunch containers to school. Early models looked like picnic baskets and featured colorful cartoons.

“This is a very rare one. It’s the only I’ve ever seen like this,” Allen says, gesturing to an electric lunch box carried during the Great Depression. Made from aluminum, the container came with a built-in plug and outlet. “So you could heat up your lunch.”

In the mid-1930s, smart marketers like Walt Disney joined the lunch box craze. Mickey Mouse was the first character to adorn the front of a metal lunch box.

Meanwhile, a Nashville company that sold gas lanterns was on the verge of bankruptcy and needed a new product to replace its outdated one. Aladdin International saw the booming lunch box trend and became a prime producer of the pop culture icons, selling an estimated 600,000 Hopalong Cassidy lunch boxes in the first year and boosting viewership of the TV show.

When the reign of metal lunch boxes ended in 1985, the industry was forced to switch to vinyl and plastic products which were not nearly as sturdy. Today’s lunch boxes are typically insulated and soft sided, easy to slip into a backpack.

For more information: Contact the Lunch Box Museum at (706) 653-6240, www.TheRiverMarketAntiques.com or Columbus Convention and Visitors Bureau at (706) 322-1613, www.visitcolumbusga.com