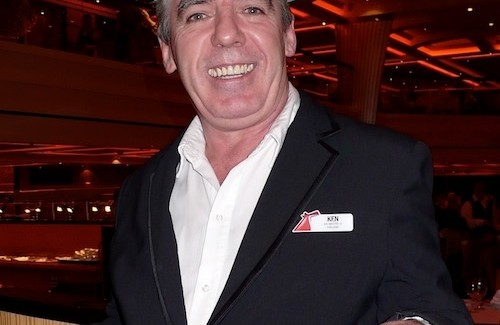 When I first heard the smooth sounds of “Nice n’ Easy” filling the dining room aboard the Carnival Breeze, I thought what a nice treat to enjoy an old recording by Frank Sinatra.

Imagine my surprise to learn that “Ol’ Blue Eyes” wasn’t the one doing the singing. That amazing voice was coming from our maitre d’.

Now, I’ve heard servers singing and dancing many times on cruises. But nothing like this. Dubbed The Singing Maitre d’, Ken Byrne could certainly have been an entertainer. But I suppose that is what he is. Ken welcomes guests to the ship’s dining room, makes sure the service is top notch and sings all at the same time.

Don’t know why I’ve never encountered this guy before. After all, he has been with Carnival Cruise Lines for 23 years.

So how did a fella from Dublin end up with such a special gig?

“Growing up in Ireland, my mother was a big Sinatra and Perry Como fan,” Ken says during a break. “She played those singers all the time and I grew up with it.”

Starting out as a busboy, Ken worked his way up to cruise ship waiter and then to maitre d’. But it was an off-hand request in 1997 that set him on his singing path.

“I was on the Carnival Triumph in 1997 when a couple was celebrating their 60th wedding anniversary,” Ken recalls. “I was walking by their table with a microphone when the man grabbed my arm and said, ‘Hey, you’re Irish. Sing a song for me.”

That’s what Ken did – much to the delight of passengers and crew. “Afterwards, one of the waiters told me that I had a great voice and that I should sing more often.”

Ken has been singing ever since.

On our cruise, the wait staff and Ken sang and danced several evenings. Really, Ken sang and the crew danced. Don’t know where they got all the energy. While we were savoring dessert, our waiters would rush to line up on the lovely dining room staircase to sing background for Ken. Or they would climb on one of the serving stands and move to the beat of “Gangnam Style” music or some other hyper song.

“I’m usually on the new Carnival ships,” Ken says. “When a new ship comes out, I’m on it.”

So far, Ken has been on 21 Carnival ships, 16 of which were new ships just being launched.

“I love it,” he says. “I love the camaraderie among the crew. I love meeting new guests. I love singing. The day I don’t like it anymore, I’ll quit.”

For our sakes, I hope that day never comes. Ken is a ship singing treasure.