Without missing a beat, the two men kept the red and white threads moving along smoothly. The task looked hypnotic to me as the workers’ hands seemed to glide in well-remembered movements.

After all, this is the traditional textile process dating back to 1854. Known as

Roba de Llengües or Cloth of Tongues, the textile does not have a front or back. Instead, both sides have an identical pattern.

“All the process is done by hand just as it was in days past,” says guide Marga, explaining the historic fabric technique at Teixits Vicens in Mallorca, Spain. “It is made only with natural fibers – 70 percent cotton and 30 percent linen.”

A family-run artisan textile workshop, Teixits Vicens is one of the last places in the world where the fabric technique known as ikat exists. Originally from the ancient East, ikat came to Mallorca along the fabled Silk Road in the 16th century.

Established in the 5th century, the ancient trade route called the Silk Road or Silk Route linked China with the West carrying goods and ideas between the two great civilizations of Rome and China. Silk went west while wools, gold and silver went east.

Mallorca was a major port in the Mediterranean during the Silk Road which is when historians believe Mallorcans may have seen the ikat textiles. The textiles have been found in cultures as far flung as Mexico, Afghanistan, India and Indonesia. The earliest known Mallorca-made ikat dates to the 18th century with clear evidence of French and Italian style in its design. 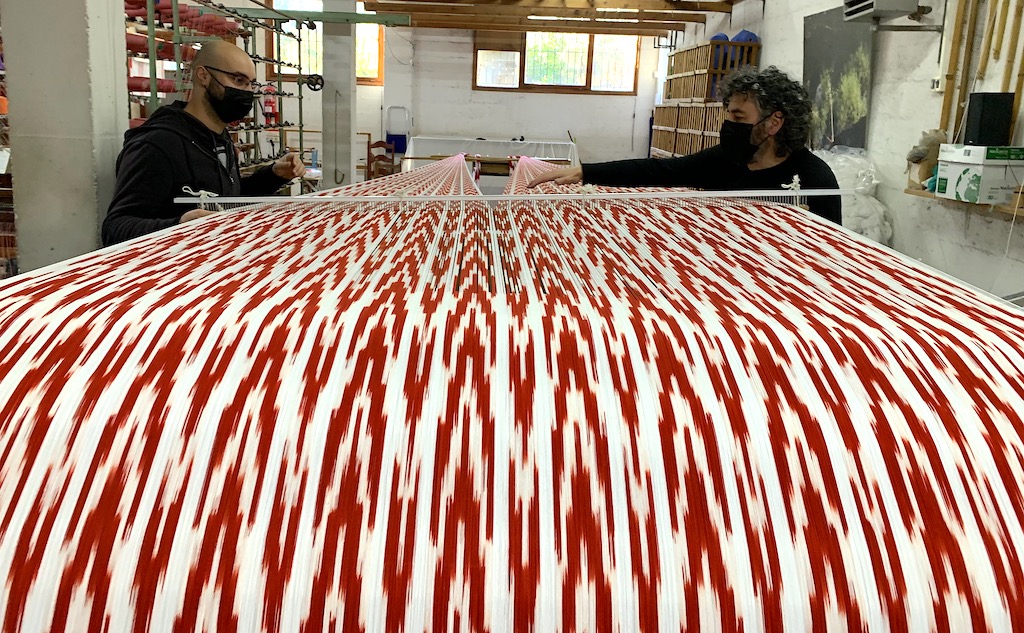 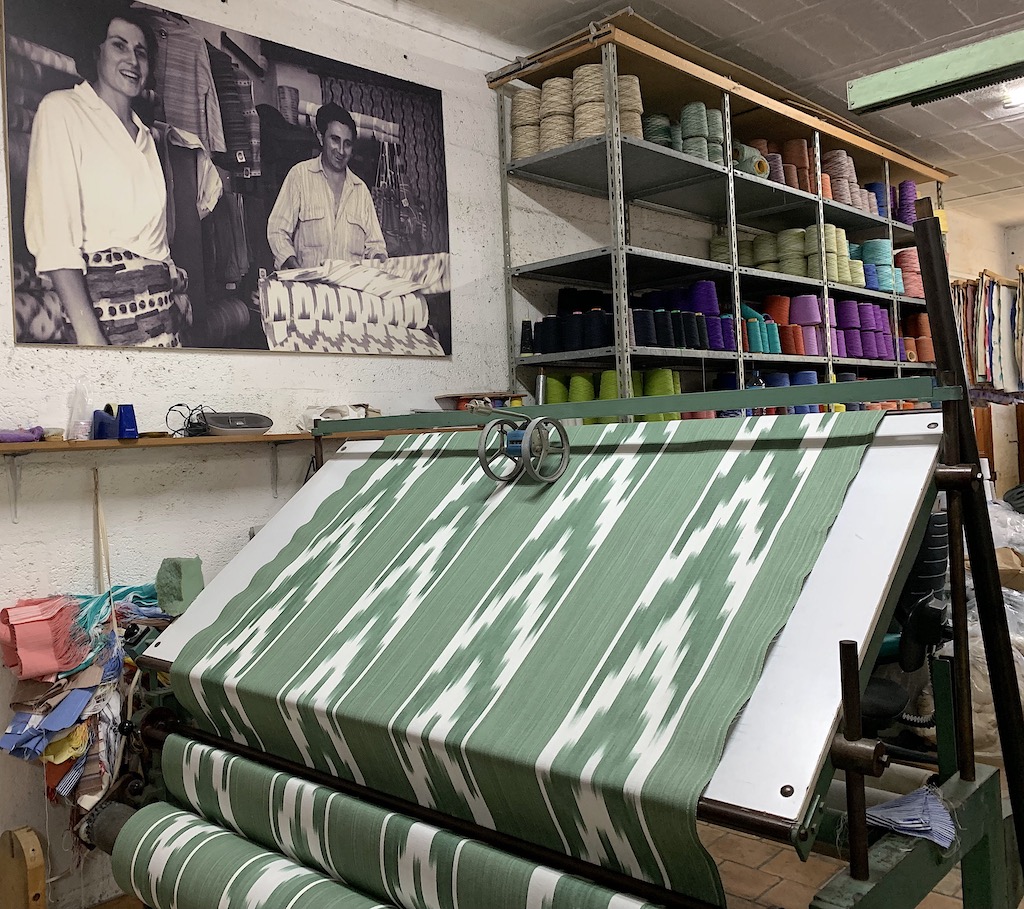 The Mallorcan ikat has its own identity, Marga says, starting with its name. Since it is known as llengües, the word refers to designs that remind of flames or tongues of fire. To create the brilliant colors and patterns, the cotton thread is dyed with parts of the thread masked to remain uncolored before it is woven.

The fabric colors are said to be inspired by the island’s turquoise sea, blue sky and green olive groves. The distinctive blue and white patterns and designs are the most popular, Marga says. She added that the fabric is quite strong and has been adapted for upholstery, clothing, shoes and much more.

“It is all done by hand,” Marga says. “This is the fifth generation of the family to own this business.” 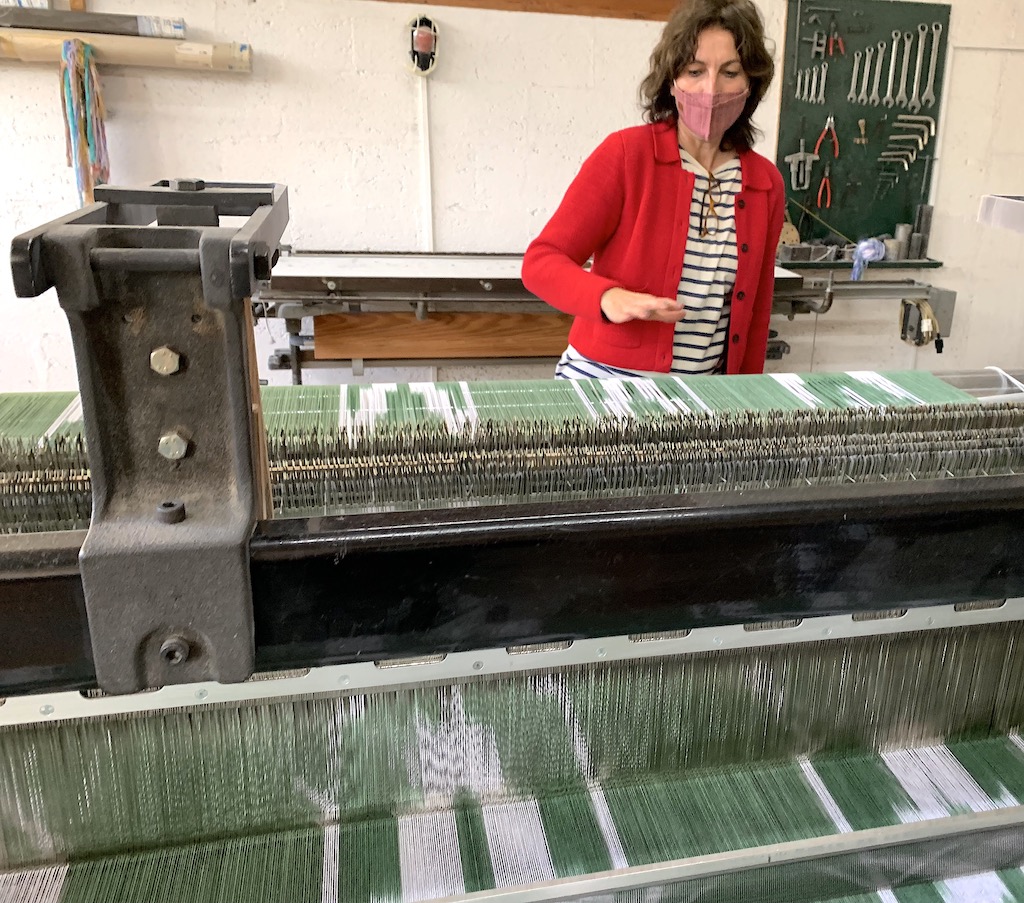 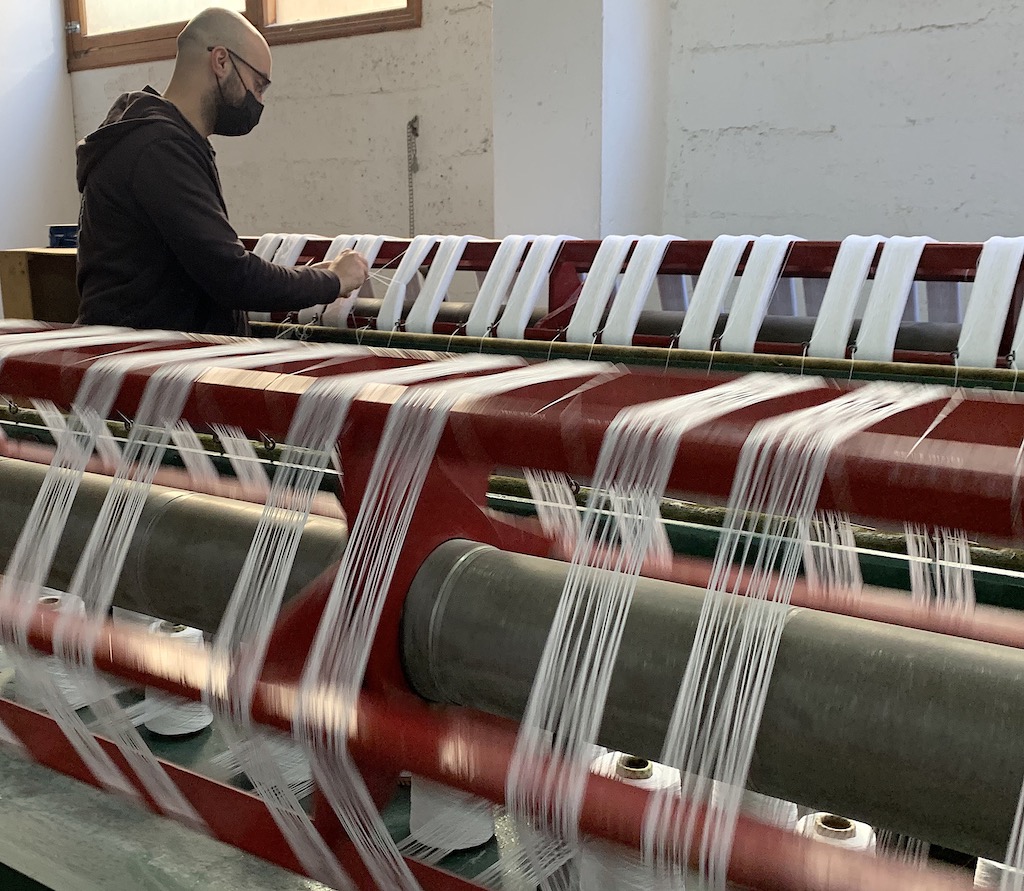 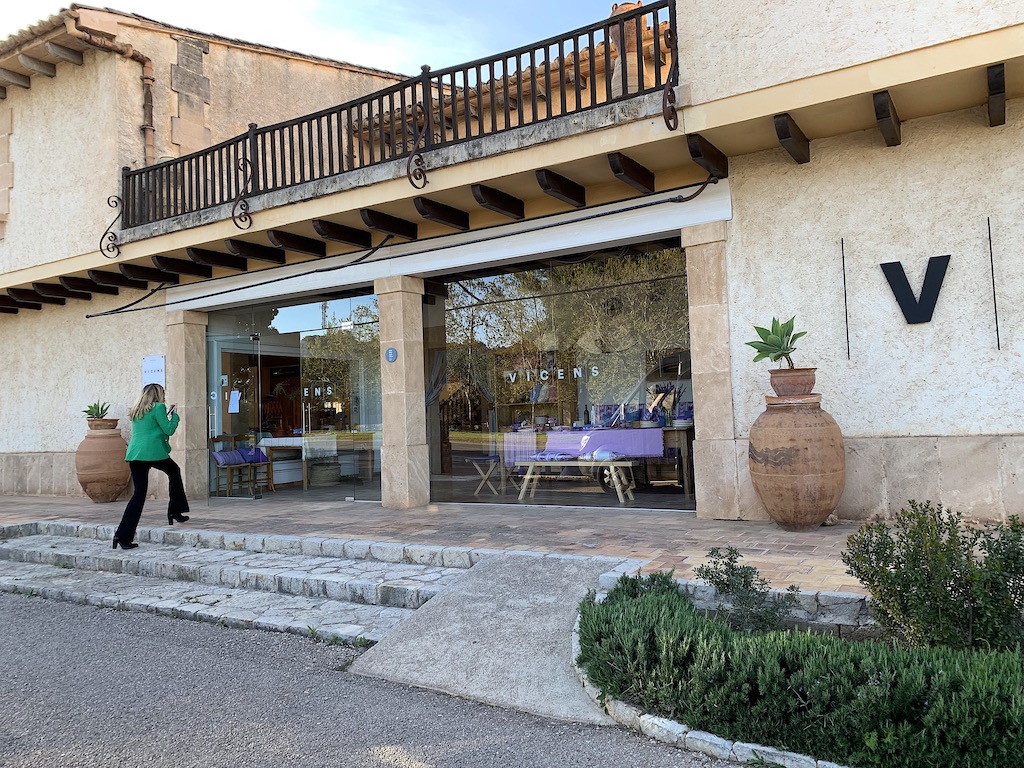 The current owners, Joana and Cati Vicens Capllonch, have followed in the footsteps of their predecessors, especially master artisan father Marti Vicenc Alemany and mother Antonia Capllonch who turned the weavings of the factory into a fifth-generation cultural heritage.

From a very early age, Marti would use the family looms to weave a type of apron made of wool and linen. When Marti’s father died in the Civil War, Marti continued weaving using notes and the little experience he had.

When Marti married Antonia, the couple worked together to preserve the family craft while branching out to create even more items. The family goal has remained to innovate in new products and colors without losing the loving philosophy of their parents and grandparents.

Today, the textile workshop and salesroom are located in the same building. With an appointment, visitors can tour the workshop and take a step back in time.

“We have something for everyone,” Marga says, gesturing to a dog bed made in the unique pattern.

Sure enough, as we looked around the salesroom, we noted that most shoppers were almost sure to find something they wanted or needed.

For more information: Visit www.mallorca.es to plan what to see and do on the island of Mallorca

For more information about Spain in general: Contact the Tourist Office of Spain in Chicago at (312) 642-1992 or www.Spain.info/en

To book a cruise to Spain: Contact Crown Cruise Vacations | Cruise Getaways You Can Afford