Walking on glacier said to be portal to center of earth 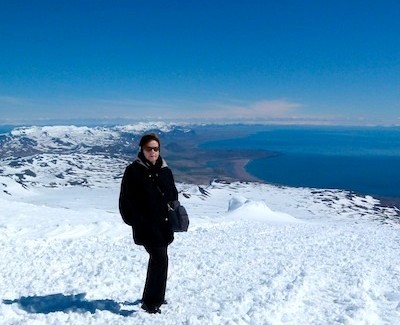 Today I walked on a glacier. I’ve seen many glaciers in my travels but I’ve never set foot on one. This was quite an adventure.

The glacier I visited is one of the most famous sites in Iceland primarily because it was featured in the novel “Journey to the Center of the Earth” by Jules Verne in which the entrance to the mysterious interior of our planet is located on Snaefellsjökull.

“The glacier is considered one of the energy centers of the world,” said expedition team member Birgi, as we left our Iceland ProCruises ship.  The earth supposedly has about seven main energy centers and this remote part of Iceland has long been associated with supernatural forces and mystery,

When all the hoopla around the year 1999 turning into 2000 happened and people feared computers would malfunction and the world would be chaos, many people went to Snaefellsjökull to escape the catastrophe. “What they were afraid of didn’t happen but many people showed up here just in case it did,” Birgir said.

The glacier is an active volcano, having been built up through numerous eruptions during the last 800,000 years.  Three eruptions have occurred under the glacier in the past 10,000 years, the last around 250 AD.  Snaefell means “Snow Mountain” and the glacier mountain was first climbed in 1754 by Eggert Óafsson and Jrarni Pálsson.

For my trip, we took the easy way. We rode a snow cat to the top but I did see several people walking up the steep climb.  Glacier tours on snowmobiles and snow cats are available during summer months between May and August.

In our open snow cat, we sat on benches with metal bars lowered in front of us, much like an amusement park ride. We soon saw the necessity for those restraints as those of us with our backs to the incline kept sliding forward into the people across from us. On the way down the glacier, the people opposite of us were doing the sliding.

Although I get cold very easily, I can’t say that I felt cold any time on our glacier trip. The secret, an expedition leader said, is to layer. So I wore a T-shirt, long sleeved shirt, vest and raincoat. Not even my feet got cold and I wore only a pair of Merrill fleece-lined leather shoes and one pair of black socks. No boots.

The bumpy ride to the 4,800-foot-top was exhilarating and eye popping. On clear days, the shores of Greenland can be glimpsed beyond the North Atlantic Ocean. Looking around, it was a scene of other-worldly beauty. Hard to tell where the blue of the sky met with the blue of the ocean or whether the white puffs in the sky were clouds or snow.

Makes me want to reread Jules Verne or maybe tonight I will dream about journeying to the center of the earth. After all, I had walked on the portal to the center that very afternoon.