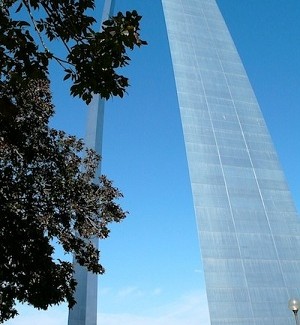 The woman next to me described it as climbing into a gigantic clothes dryer and slamming the door shut. She had a point.

In fact, visitors have been known to balk when it came time to scrunch into the space-capsule-looking gadget. Some prospective riders have turned and walked away when faced with the claustrophobic prospect. So why do it?

For what lies at the end of the ride.

The way to get to the top of the Gateway Arch in St. Louis is on the almost four-minute ride that climbs up the huge arch leg. Once there, the beautiful riverfront city is spread out below your feet. That alone makes it worthwhile.

Nowhere else is a sight of St. Louis available like this. The 64-foot observation room, with 24 windows, offers a spectacular 30-mile panoramic view. When my beautiful riverboat pulled into St. Louis, passengers walked along the riverfront to see the Arch up close. And many of them decided to take that ride to the top.

There are 1,076 steps in the stairway of each leg of the 630-foot-tall Arch. But they are used by maintenance personnel only. Visitors are not allowed to walk up or down them.

Trams carrying five passengers each creak and clang their way up the Arch. It sounds a little like a roller coaster inching its way to the top of an incline. I almost expect to feel the whooshing drop as the coaster plunges down. (It doesn’t, of course).

Our guide does point out that the trip on the way down is almost a minute faster. I’d rather not think about it.

Once at the top, visitors can spend as much time as they want in the observation room.

Some folks swear they can feel the Arch sway from their perch on top. It is a strange floating feeling up there but I can’t say I felt much movement. The wind has usually been calm whenever I ventured atop.

However, the Arch is designed to sway as much as 18 inches and can withstand an earthquake. It takes a 50-mile-an-hour wind to move the top 1 1/2 inches each side of center.

Like a gigantic steel rainbow, the Arch towers over the city. Dedicated in 1968, the $13 million Gateway Arch was the first big step to breathe new life into downtown St. Louis.

It all came down to a fraction of an inch when, on a windy October day, workers put the last piece in architect Eero Saarinen’s vision in place to complete the arch that rainbows the city skyline.

Saarinen designed the colossus to celebrate the soaring mind of Thomas Jefferson. Had Jefferson not obtained half a continent from Napoleon with the 1803 Louisiana Purchase, the national destiny might have ended east of the Mississippi.

Located where the mighty Illinois, Mississippi and Missouri rivers come together, St. Louis gave access to New Orleans and other emerging river towns along the Mississippi. Riverboats jockeyed for position on the Mississippi and from them stepped families with hopes they had tucked into a few trunks and no further assets than a yearning to press west.

When Thomas Jefferson made the Louisiana Purchase for about 4 cents an acre in 1803, St. Louis was already a 40-year-old town of 3,000 with a flourishing river trade and the beginning of commerce. When Lewis and Clark pushed off in 1804 to explore the West, St. Louis’ position as the Gateway to the West was assured.

Why do cruise ships have Godmothers anyway?

Greece: As We See It