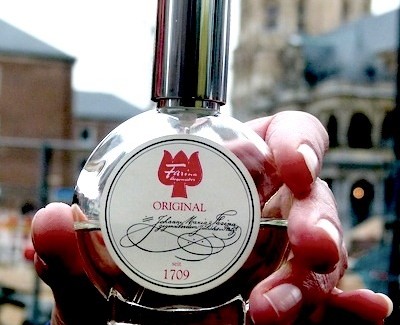 COLOGNE, Germany  – Napoleon Bonaparte loved Eau de Cologne so much that he ordered 50 bottles a month. The famous emperor used the fragrant water extravagantly and supposedly had special boots designed where he could stash an emergency bottle of cologne.

“Back then, they didn’t take baths as often as we do today so they used perfume to mask their body odor,” tour guide Marion said.

However, some of the perfumes smelled so heavy that they weren’t pleasant either. Then along came a perfumer who created a light and fresh scent. It became an immediate and expensive bestseller among nobility.

Marion shared these historical tidbits while we stood in front of the world’s oldest perfumery in Cologne or  Köln, as the Germans call this city on the Rhine River.

It was here that Johann Maria Farina created the product that he named after his hometown – Eau de Cologne.

“This is the same place where the same family has made the same product for more than 300 years,” Marion said.

Of course, I had to go in the shop and get a couple of bottles of  Eau de Cologne. And it does smell exactly as Farina described it:

“My fragrance is reminiscent of a spring morning after the rain: of orange, lemons, grapefruit, bergamot and blossoms. A sheer symphony of scents … It gives me great refreshment, strengthens my senses and imagination.”

The unisex fragrance is made from essences of lemon, orange, bergamot, mandarin, lime, cedar and grapefruit. “That is still how it is made today,” Marion said.

The shop also has an interesting museum that explains the history of Eau de Cologne and displays some wonderful memorabilia, including exquisite silver goblets from which Ludwig II of Bavaria drank as a guest at the perfumery. In the 18th century, making a purchase at the Farina House was an art form.

In the Farina House Museum, the tour guide was dressed as Farina himself in a costume from the ornate Rococo period. One of my favorite pieces in the museum was a Portuguese desk where Farina worked until 1760. He kept all the company records and wrote dozens of letters everyday. Today, Farina’s archives are the largest and most complete business records in Europe.

Born in Italy in 1685, Farina learned the ancient art of perfume making from his grandmother. He moved to Cologne in 1706  to work with his  older brother. At the age of 23, Farina created his trademark scent – Eau de Cologne. He set up his fragrance company in 1709.

In something new for the time, Farina was able to recreate the identical, unmistakable scent time after time. In the early 18th century, it was scarcely conceivable that a perfume would always smell the same.

At the end of his life, Farina could boast that he had supplied Eau de Cologne to the rich and famous of his era. “There is no imperial or royal house in Europe that I did not supply,” he wrote shortly before his death.

Of course, with such success came many imitators, our guide said. The museum showcases criminal stories of counterfeiters from the time when brands had no legal protection.

Besides the wonderful scent, J.M. Farina’s Eau de Cologne can be identified by two marks. The first trademark registered under the German law on trademark protection of 1875 is the Rococo-style flourishes of Farina’s signature on the label.

The other symbol is the red tulip. In the 17th century, the tulip was a precious item that bloomed in the gardens of Turkish palaces. The Dutch paid huge amounts of money for a bulb of this beautiful flower. Desiring an image of great beauty, rarity and expense for his trademark, Farina chose a red tulip.