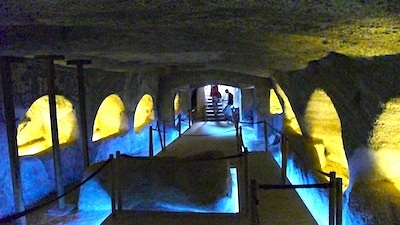 MILOS, Greece – It gave me shivers just to be standing here. Tucked into a hillside on the Greek isle of Milos are the graves of early Christians. These catacombs are from the 1st century AD. It is mind boggling to consider what took place here and how long ago it happened.

“The catacombs are considered to be the most important early Christian monument in all of Greece,” said guide Andreas Belivanakis. “Milos was declared a ‘Holy Island’ by the Greek church because of the catacombs. We believe the catacombs of Milos are older than the ones in Rome.”

The small volcanic island of Milos is beautiful and dotted with thermal springs considered to have therapeutic benefits. It is filled with intriguing history and has about 70 beaches for great swimming, fishing, hiking and boating.

Sporting his “Milos is for Lovers” logo shirt, Belivanakis explained when we arrived for our morning tour that the island got its nickname because it is where the famous statue of Venus de Milo was discovered. The ancient Greek goddess of love and beauty was found in 1820 buried in a hillside by a farmer looking for marble slabs to build his house.

“The farmer was disappointed when he found the statue because he thought it was useless. What he wanted was marble for his house so he started covering the statue back up,” Belivanakis said. “An officer in the French navy saw it and offered to pay the farmer to continue digging it up.”

The base has an inscription with the sculptor’s name – Alexandros of Antioch, Belivanakis said. “No arms were ever found. The arms may still be buried here but it is not a priority for archeologists to dig up this area.”

The famous armless sculpture of a woman is now housed in the Louvre Museum in Paris. “All we have is the sign here to show where the statue was found,” Belivanakis said.

Located next to the discovery site of Venus de Milo are the ruins of an ancient Greco-Roman marble theater along with the remnants of the walls from the old city. You can also enjoy a magnificent view of the bay of Milos from this position.

But back to the Christians catacombs. Those were discovered in the 1830s by children playing in the area. “They were first excavated in 1834 but tomb raiders had already been here years before and taken everything, including the bones,” Belivanakis said.

The catacombs were used by the early Christians first as a burial site and later as a place of worship and a refuge from persecution by the Romans. Only three sections of the sizable necropolis have been uncovered but it is estimated that as many as 2,000 Christians may have been buried here.

Although the Bible doesn’t name Milos as the place where Saint Paul was shipwrecked on his way from Athens to Crete, Belivanakis said that scholars believe from the descriptions that the island must have been Milos.

“It is like we are an undiscovered island for most people,” Belivanakis said. “We are a little gem out here by ourselves.”

Princess Cruises debuts The Voice of the Ocean singing competition