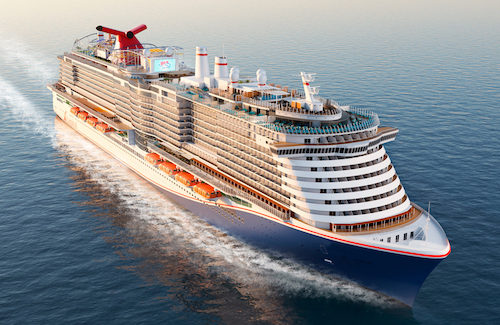 If the last name of the new Carnival Radiance godmother sounds familiar, it probably should. In a celebration of all things fun and family, Carnival Cruise Line christened its newest ship in December in a naming ceremony in Long Beach, California.

The ship’s godmother, Lucille O’Neal, and her son, Carnival Chief Fun Officer Shaquille O’Neal, were featured guests at the event. As part of the ceremony, Lucille and Shaquille helped pour champagne atop a traditional ship’s bell officially naming the ship.

The City of Refuge Sanctuary from Gardena, California, rocked the house with a gospel rendition of “We Are Family” as event guests waved light sticks during the emotional grand finale. 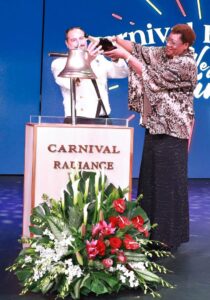 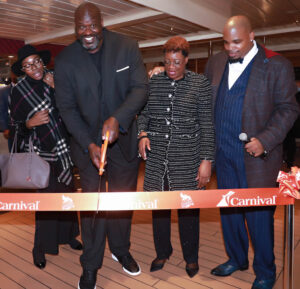 “What a special evening it was to celebrate the debut of the Carnival Radiance with my son by my side in what truly felt like a ‘We Are Family’ event,” Lucille said in a news release. “It has been such a pleasure to be included in these exciting festivities, so I can only imagine how incredible it will be for guests to sail aboard this spectacular ship. They’re going to love it.”

Christine Duffy, president of Carnival Cruise Line, presented Lucille with a $25,000 donation to the Odessa Chambliss Quality of Life Fund that honors the lifetime accomplishments of Lucille’s mother who worked in the medical field as a nurse. The fund’s primary mission is to provide financial contributions to help support students seeking a career in nursing and education.

“Carnival Radiance features all of Carnival’s fan favorites and more, so we are beyond excited to finally welcome her to the West Coast and to our fleet,” Duffy said in a news release. “And having Shaq’s mom, Lucille, an accomplished speaker who donates her time and talent to a wide range of charitable organizations, as the ship’s godmother has made it even more special.”

Prior to the naming ceremony, the evening kicked off with the mother-son duo cutting a ribbon to officially open Big Chicken, the second seagoing restaurant created by Shaquille. The restaurant debuted on Mardi Gras earlier this year, featuring dishes based on his family’s recipes.

The exterior of the ship has been adorned with the line’s’ new red, white and blue hull livery fashioned after its flagship Mardi Gras. All the ship’s public spaces have been transformed as well, including the water park, youth facilities, retail shops, Cloud 9 Spa and a new Liquid Lounge, home to Carnival’s award-winning Playlist Productions shows.

In addition to Big Chicken, new offerings added to Carnival Radiance include Guy’s Pig & Anchor Bar-B-Que Smokehouse created by Food Network star and longtime partner Guy Fieri and the Heroes Tribute Bar saluting those who serve in the Armed Forces.

Here’s to a Happy New Year to All!