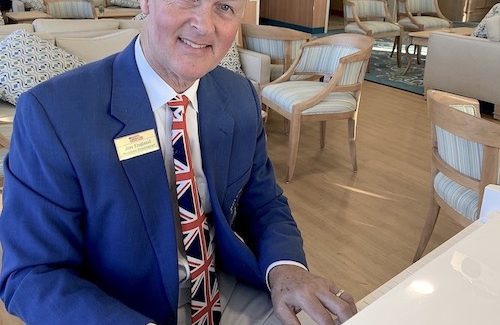 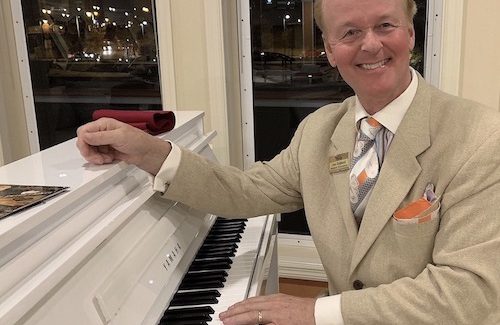 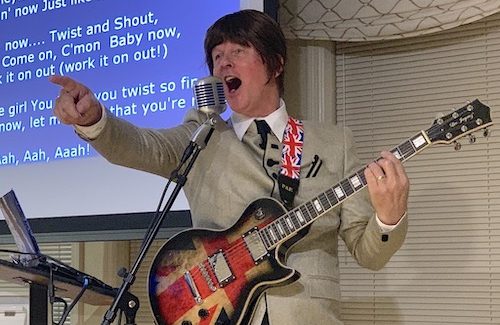 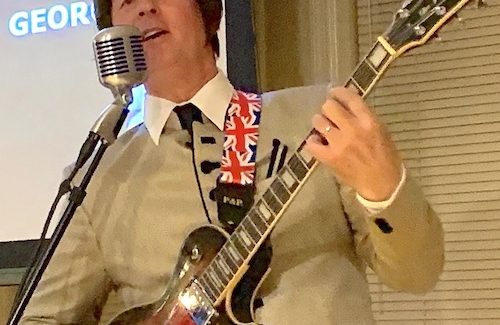 Jon’s amazing phonographic memory allows him to play all kinds of music – from classical to show tunes to Big Band and pop, even the Beatles. He also can play a wide repertoire of musical instruments.

So how did the man from the English seaside become a cruise ship entertainer with the audience-bestowed nickname The Velvet Piano Player? “My father,” Jon answers simply.

Growing up near Dorchester in England, Jon was the grandson of a vaudeville pianist. “I guess I got it from my grandmother,” he says. “There were three pianos in our home and I can’t remember when I didn’t play.”

When he was 19 years old, Jon was given a career boost by his father. “My dad submitted a tape of me playing to Cunard and told them, ‘If you are ever looking for a piano player, my son is a great one.’”

Two weeks later, Jon got a call from Cunard. That was back in the early 1980s. “And I’ve been doing it ever since.”

In fact, Jon has sailed around the world five times and entertained on most cruise lines. On my American Harmony cruise, Jon was on hand in his spiffy ocean blue jacket emblazoned with the name “Jon England – Royally Entertained” (www.jonengland.com) boasting two crossed flags below, one a symbol of the United States of America and the other of the United Kingdom.

“He is one of the best-dressed musicians I’ve ever seen,” notes American Harmony passenger Pam of New Hampshire. “I always look forward to seeing what he wears tomorrow.”

And Pam is never disappointed. Color coordinated and spiffy, Jon is dressed to the nines from his top to his toes. When the American Harmony docked in Natchez, Jon climbed the steep hill into town partially for exercise and partially to shop at a select store in Natchez. At least one other man aboard decided to do the same when he heard where Jon was headed.

For entertainment aboard the American Harmony, Jon tickles the ivories during the evening cocktail hour in the Magnolia Lounge. He also conducts a Name That Tune contest with music from across the decades. For late night entertainment, England plays requests on his magical Piano Juke-Box.

One night Jon shared gems from his PBS television pilot. Another afternoon, he stylishly interpreted the maestro’s manuscripts for a piano concert of Chopin, Liszt, Rachmaninov, Gershwin, Debussy, Paganini, Mozart and more.

My favorite on our American Harmony cruise was the evening Jon presented Beatlemania. Strapping on a Brit-pop guitar and wearing a mop-top wig and Nehru-style jacket, Jon rocked out the Fab Four’s greatest hits. Passengers sang along to the full screen lyrics.

When he’s not entertaining on land or sea, Jon lives in Connecticut with his wife Margaret and daughter Lilia. Jon moved to America in 2000 but still has an open door to visit his childhood home.

“I have one sister who still lives in the old home place in England so I can go back and visit there,” he says.

As for how his life and career have evolved, Jon says it is the best of all worlds.

“I grew up by the sea and I grew up with music so I have the sea and music in my soul,” he says. “This is the perfect job for me. I love what I’m doing.”