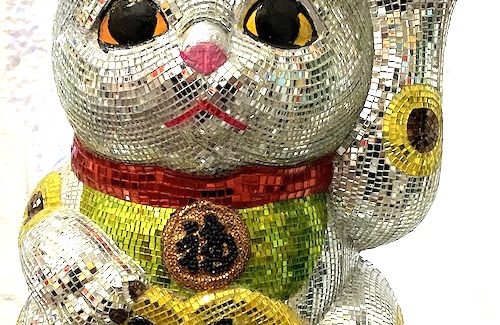 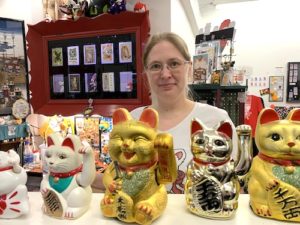 “I’ve just always loved cats,” owner Micha Robertson said. “From the time I was born, I have had cats. And I’ve always collected cat-themed merchandise.”

Of course, these are not just any cats. These are the special beckoning cats known as Maneki Neko. Most often seen at the entrances of Japanese and Chinese restaurants, the little figurines are said to bring good luck or prosperity.

“That is the basic idea but these are all different and that’s what is so amazing to me,” said Robertson, standing inside her Lucky Cat Museum in Cincinnati. “The name Maneki Neko is Japanese for ‘beckoning cat.’”

It all started when a friend gave Robertson a lucky cat from an Asian food store. Then in 2002, Robertson saw a similar lucky cat statue in a Goodwill store. It was an impulse buy that started her on the way to her collection of about 2,000 specimens. At first her growing cat paraphernalia filled a shelf in a home bookcase, then the cats took over the entire bookcase, plus shelves and a whole wall of Robertson’s home.

By 2012, the collection had outgrown her home so Robertson decided to share her treasures with the public and opened the museum in Essex Studios. The museum doesn’t charge admission.

“People shouldn’t have to pay to look at it,” Robertson said. “I wouldn’t charge people to visit me at home and this is part of my home. It’s my collection.”

Of course, like many beloved creatures, Maneki Neko has a legend behind it. The lucky cats have been popular since Japan’s Edo Period which ran from 1603 to 1868.

The story goes that a lord was riding by a dilapidated temple that was now home to only one priest and his old cat. Suddenly, a dangerous storm began brewing. The lord and his horse sought refuge under a nearby tree. “But then, the lord spots the priest’s cat with his paw raised beckoning him in the temple,” Robertson said.

For some reason, the lord complied. “Moments later, lightning strikes the tree,” Robertson said. “If he hadn’t moved, the man would have been killed. He knew that cat had saved his life.”

In honor of his good fortune, the lord revived the shrine and made it his family temple. Now, people from around the world visit Gotokuji, the actual place in Setagaya, Japan, and purchase lucky cat figurines. Many leave their souvenir cats at the temple to honor granted wishes. 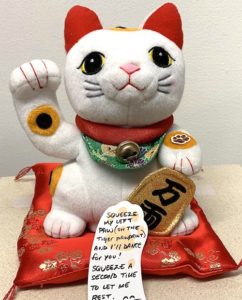 This lucky cat dances at the squeeze of his paw

In the Lucky Cat Museum, visitors can see the pop culture icons in all sizes, shapes, materials and colors. Some are ceramic, plastic, wood, stone, metal and plush. One chats in Japanese at the push of a button. One is covered by crystals from head to toe. A row of solar-powered metallic cats seems to have endless waving. Then there’s the lucky-cat telephone, finger puppets, nail clippers, mugs, lamps, cigarette lighters, night lights, soap, candles, teapot and toilet paper rolls.

A massive inflatable lucky cat greets visitors at the door. Bobble head lucky cats nod in agreement. A lucky cat casino game invites wagers. Even Robertson’s feet are clad in cat-decorated socks. The Lucky Cat Museum has a neat gift shop with, of course, all kinds of lucky cat items to buy.

Some of the museum figurines are more than a century old. Some quite new. My favorite was a box-shaped bank. Putting a coin on the edge of the bank, I watched as a cat paw stealthily reached out and snatched the coin for safe keeping.

There is also a great deal of symbolism especially surrounding the color of the cat. The traditional color of calico is considered to be the luckiest. White means happiness, purity and positive things to come. Gold signifies wealth and prosperity. Black wards off evil spirits. Red denotes success in love and relationships. And green means good health.

Even what the Maneki Neko is wearing and holding has a meaning. The traditional Maneki Neko is a finely dressed cat usually adorned with a bib, collar and bell. “In the Edo period, it was common for wealthy people to tie a little bell to their cat’s collar so they would know where it was,” Robertson said.

Some cats hold a small marble or gem supposed to be a money magnet, although some people believe the marble or gem is meant to be a crystal ball and represents wisdom and future knowledge.

The self-proclaimed “crazy cat lady” laughed when asked if she is now done collecting lucky cats. “Oh, no,” Robertson said. “I love them all and am always looking for new ones.” 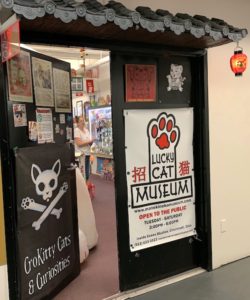 The Lucky Cat Museum opened in 2012

For more information: Contact the Lucky Cat Museum at 513-633-3923, http://www.luckycatmewseum.com