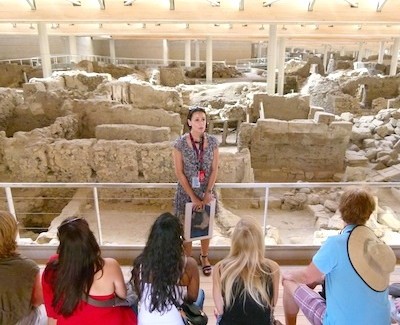 SANTORINI, Greece – Could this actually be the fabled Atlantis? Some people think it is and some research does support that belief.

However, others believe the mysterious Atlantis never really existed. That it was a make-believe place used by the early Greek philosopher Plato to teach a lesson in humility.

“I don’t have an opinion one way or another,” guide Maria said showing us around the ruins. “You can hear the story, see the site, do the research and make up your own mind.”

Regardless, the ancient ruins of Akrotiri are fascinating. Only 29 square miles in area, Santorini is one of the most photographed islands in the Aegean Sea and is  considered by many as the single most spectacular sight in Greece.

I knew that I wanted to ride the cable car down the steep hillside to return to the old port. The ride takes about three minutes as compared to the more than 600 steps down the narrow cliff side on a donkey path.

I also definitely wanted to see Akrotiri and I’m glad I did. The civilization that lived in this ancient city more than 3,600 years ago was extremely advanced. Decisions were made collectively and seemed based on an early form of democracy.

Thought to be Minoans, the long ago residents lived in three-story houses – some with balconies – with indoor plumbing, including hot and cold water, and clay pipes to carry waste away from their homes. They used toilets and bathed once a day in bathtubs.

Homes were decorated with sophisticated architecture and artworks, including vivid frescoes.  “Girls wore makeup – even eye liner and red nail polish – and lots of jewelry,” Maria said. “They were very elegant.”

The deity was a feminine one. “What they worshipped was Mother Nature,” Maria said. “Saffron was a sacred plant for those days. It gave them color for clothing, taste for food and scent for religious ceremonies.”

The long ago residents relied upon farming and sea trade. They cultivated olive trees and grain and must have been experienced sailors. “We know that they traveled to Egypt by sea,” Maria said. “Their ships could be up to 99 feet long with a rudder and a sail that could be folded. They must have known how to follow the stars for direction.”

Then a catastrophic natural disaster happened around 1450 BC. Two thirds of the island collapsed after violent volcano eruptions. “It was probably the biggest eruption ever experienced by people,” Maria said. “It was very violent and very quick.”

Afterwards, Santorini was uninhabited for almost two centuries while the land cooled and regenerated itself. “Nothing remained standing. It was like a ghost place,” Maria said. “The city was lost and became a myth.”

Santorini was eventually re-inhabited. One day a farmer was working the land when his donkey fell into a hole. “Archaeologists said there must be something down there and discovered the lost city,” Maria said.

Excavations began in 1967 under the direction of Professor Syridon Marinatos of the University of Athens. But the project was halted in 2005 when a modern metal shed constructed over the site collapsed, killing a British tourist and injuring several others. The site was closed to visitors until April 2012.

“Unlike Pompeii, no human remains have been discovered at Akrotiri,” Maria said. “We think they had enough warning about the volcano eruptions and they tried to escape with their valuables.”

No gold or silver was found in the ruins – except for one golden statue of an animal which may have been part of a worship ceremony. Some researchers think the 500-foot-tall tsunami waves that followed the earthquake may have swept the Minoans out to sea along with a large chunk of the island. Now Santorini is shaped like a crescent moon with one huge missing portion.

“We never stop hoping that we will find more and get more answers when more is excavated,” Maria said. “We need about two more centuries for the whole city to be brought to light.”

While questions remain about whether Akrotiri is the lost Atlantis or not, Maria said that the lead excavator on the Santorini project says that “Atlantis is a myth created by Plato.”

“It was a Utopia that Plato created,” Maria said. “He created this myth and he destroyed it but with a message. He said that arrogance is an insult to the gods. That the gods will punish the arrogant, those with too much pride, too much hubris.”

Sounds like a good message, one that leaders and people of any civilization would do well to remember.