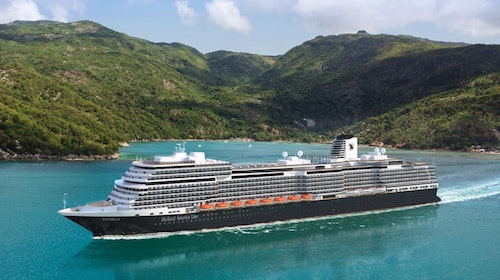 The Rotterdam is expected to be delivered from Fincantieri’s Marghera shipyard in Italy on July 30, 2021. The ship will spend the summer exploring Northern Europe and the Baltic on roundtrip cruises from Amsterdam.

“The first ship for Holland America Line was the original Rotterdam,” Gus Antorcha, Holland America Line’s president, said in a news release. “The company was headquartered in the city of Rotterdam for many years, and the name has been a hallmark throughout our history since 1872 so clearly the name is powerful and symbolic.”

With the current Rotterdam leaving the company and transferring to an undisclosed buyer, Antorcha said “we knew we had a unique opportunity to embrace the name as our new flagship and carry on the tradition of having a Rotterdam in our fleet.”

The new vessel will be the seventh ship to bear the historic name. “Seven is a lucky number,” Antorcha said. “And we know she’s going to bring a lot of joy to our guests as she travels across the globe.”

The first ship in the R Class, the 61,849 ton Rotterdam being replaced was introduced in 1997. Carrying 1,404 guests, it is the sixth Holland American Line ship to be named Rotterdam.

History of the Rotterdam Name

Holland America Line’s first ship was Rotterdam, which sailed its maiden voyage from Netherlands to New York on Oct. 15, 1872, and led to the founding of the company on April 18, 1873.

Rotterdam II was built in 1878 for British Ship Owners Co. and purchased by Holland America Line in 1886. Rotterdam III came along in 1897 and was with the company until 1906.

The fourth Rotterdam joined the fleet in 1908 and also served as a troop carrier when World War I ended. Following the war, it made regular cruises from New York to the Mediterranean.

Rotterdam V, also known as “The Grande Dame,” set sail in 1959 and began sailing transatlantic crossings with two classes of service. It later converted to a one-class ship in 1969. She sailed with Holland America Line for 38 years until 1997, including several Grand World Voyages, and currently is a hotel and museum in the city of Rotterdam.

Rotterdam VI, the most recent to cruise for Holland American Line, was introduced in 1997 and the first ship in the R Class.

Rotterdam VII also will celebrate live music with an exclusive collection of world-class performances each night – from Lincoln Center Stage and B.B. King’s Blues Club to Rolling Stone Rock Room and Billboard Onboard.

“It is always difficult to see any ship leave the fleet, especially those that have a long and storied history with our company, said Stein Kruse, chief executive offer of Holland America Group and Carnival UK.

“I recognize and appreciate the deep affection our guests have toward our company and the ships in our fleet,” Antorcha said. “I look forward to carrying on those beloved shipboard offerings while cultivating new ideas to bring to our guests.”

Cover photo: A rendering shows what the new Rotterdam will look like.