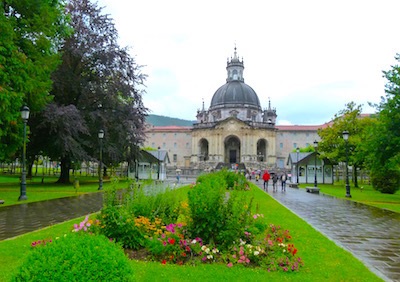 Gravely injured when a cannon ball crushed his legs, the warrior endured several excruciating surgeries without anesthetics. Warned to prepare for death, the nobleman spent his bedridden time reading whatever was at hand.

“The only books he had were about the lives of the saints and Christ,” said guide Mikel Mugalari. “Then a miracle happened. He didn’t die. He had a conversion. He decided to live his life for God.”

That man, of course, was Saint Ignatius, founder of the Society of Jesus or Jesuits. When he died in 1556, the former soldier and master swordsman had thousands of Jesuit followers who traveled the globe to share God’s words.

“Visitors from all over the world come here,” Mugalari said as we walked through a sprinkling rain down a long landscaped path to the place where Saint Ignatius was born in 1491. The magnificent birthplace seems a surprising pilgrimage shrine in this tiny town of Azpeitia (pop. 14,000) in northern Spain. The site is about 40 miles from the cruise port of San Sebastian.

Although there was another large group when my guide Mugalari of Tours by Basques and I visited the home, the place seemed almost church-like quiet. Pausing to take a photo in the large room where Saint Ignatius was born, I could almost imagine him living here many centuries ago.

Built around the 14th century, the huge tower house was home to an aristocratic family. The castle is divided into a lower half built of stone and an upper half composed of brick. The stone fortification recalls the house’s past as a fortress. The second floor built in brick was the main living quarters. It was here that Dona Marina Saenz de Licona gave birth to her last son, officially named Inigo de Loyola. She died when Ignatius was 7 years old. His father died when he was 16.

The youngest of 13 children, Ignatius Loyola dreamed of doing great deeds. But those, he thought, would be on the battlefield. By his own admission, Ignatius was “a man given to the vanities of the world, whose chief delight consisted in martial exercises, with a great and vain desire to win renown.”

During a battle with the French in 1521, Ignatius was gravely wounded. A room with a life-sized statue of Ignatius lying on his death bed is now the Chapel of the Conversion. The books that he read and that changed his life are shown there as well.

When – against all odds – Ignatius recovered in the spring of 1522 with a limp for a constant reminder, he was 30 years old and ready to embark on a new life. He lay down his military uniform, gave his fine clothes to a poor man and clothed himself in sackcloth. In a Benedictine Abbey, he hung up his sword and dagger before the Virgin Mary and dedicated his new life to God.

Helping in a hospital, Ignatius also retreated for long prayerful hours to a cave trying to gain a better understanding of God and God’s plan for him. Writing down his thoughts and experiences in a journal, Ignatius compiled a book he called “Spiritual Exercises.” His book is considered one of the most influential ever written on the spiritual life.

When the new year dawned, Ignatius decided it was time to make a pilgrimage to the Holy Land. Calling himself “the Pilgrim,” Ignatius planned to live in Jerusalem and convert non-believers. But the Holy Land was a troubled place and church officials didn’t want Ignatius to cause further problems so they asked him to leave after just two weeks.

Preparing to spread the word of God

If he wanted to spread the word of God, Ignatius realized he needed to learn Latin and other subjects for the priesthood. He went to a grammar school with young children and later to universities, earning a master’s degree at age 44. Soon, Ignatius had attracted like-minded friends and the group decided to travel to Rome in 1540. There, Pope Paul II proclaimed Ignatius and his circle of friends an official religious order – the Society of Jesus.

Jesuits soon found their niche in education. Before Ignatius died, there were about 1,000 Jesuits who had established 35 schools. That number soared to almost 400 schools within 35 years after his death.

Suffering from stomach ailments and other medical problems, Ignatius knew his death was near.  During the night, he was heard to murmur, “My God. My God.” At dawn on July 31, 1556, at the age of 64 and without last rites, Ignatius ended his journey to God.

“How wretched the earth seems to me when I look up to heaven,” Ignatius once said. He was canonized six years later and Saint Ignatius Feast Day is celebrated every year on July 31.

As a holy site, Saint Ignatius’ birthplace has a cathedral as well as statues, artifacts, writings and a detailed diorama depicting his life. Two large stained glass murals show Ignatius the soldier and Ignatius the pilgrim.

As we were preparing to leave, I stopped for one last look and saw an elderly woman with tears in her eyes. She had knelt to pray before one of the images of Saint Ignatius. Her words were not in a language I understood but no words were needed to explain her deep feelings at being in this spiritual place.