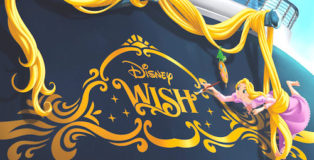 My granddaughter Arianna just got half her Disney wish. When I told her that Disney Cruise line will be launching a new ship, I asked what she would suggest for a name.

“Wish,” she said without hesitation. “A Disney Wish, like ‘When you wish upon a star.’” Read more...

May 24, 2017 | Jackie Sheckler Finch
A tale as old as time will take to the stage of the Disney Dream beginning Nov. 6 when the ship sails three- and four-night cruises to the Bahamas from Port Canaveral, Florida.

The brand-new musical production was inspired, of course, by Disney’s new live-action adaptation of the animated classic that is now thrilling theater audiences.

The enchanting fairytale spotlights the power of transformation through true love and courage. The new Dream production combines the magic of both the live-action 2017 film and the award-winning 1991 animated feature.

Songs from both films will be part of the Dream production. One of the most iconic songs will be completely re-imagined for the stage. “Be Our Guest” is becoming a multi-course French dinner for the stage.

Beloved characters like Lumiere, Mrs. Potts and Cogsworth will be brought to life through creative puppetry and elaborate costumes for the Dream presentation.

The 4,000- passenger Disney Dream was launched Jan. 26, 2011. One of the most popular features is the ship’s first-ever water roller coaster at sea – the Aqua Duck is 250 yards of transparent tubing that sends guests soaring over the top decks and at one point – over the ocean.

The Dream also has a bonus for passengers in inside staterooms – each inside stateroom has a “virtual” porthole showing rolling waves and Disney characters swimming by all in HD. 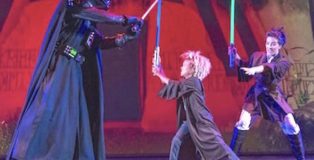 Want to shake hands with Spider-Man? Have your photo taken with Captain America? Test the strength of Thor?

Youngsters can celebrate with their favorite Super Heroes and Super Villains from the Marvel Universe during special voyages on the Disney Magic this fall.

“Marvel Day at Sea” will combine the thrills of renowned Marvel comic figures and invite cruisers to summon their own Super Hero for an unforgettable day at sea.

Seven cruises departing from New York City will transport guests to a new realm of possibilities when the Marvel University assembles on the Disney Magic.  The event features all-day entertainment including exclusive interactions with some of the mightiest Marvel Super Heroes and the menacing foes that oppose them.

A marvelous deck party will include a thrilling display of themed pyrotechnics, lighting, sound effects and the largest collection of Marvel Super Heroes and Super Villains ever assembled on a cruise ship.

Kids and families can test their Marvel knowledge and enjoy friendly competitions during trivia games about courageous heroes and fun facts from the Marvel University.

For young heroes-in-training, Marvel-themed games, activities and arts and crafts will be offered throughout the day in the Marvel’s Avengers Academy in the Oceaneer Club. 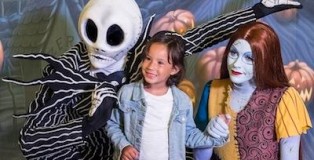 The wind is howling. Leaves are skittering to the ground. It’s that bewitching time of year and Disney Cruise Line will be treating guests to a wickedly good time. Disney ships will be transformed into a ghoulish wonderland filled with frightfully fun events and activities, special decorations, unique menu items in the restaurants and themed parties on deck. Read more...

Holiday Sailings for your family 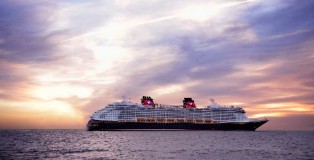 Cruise vacations offer holiday sailings plus kid-specific programs, all within the inescapable confines of the cruise ship, allowing families to enjoy the holidays in a relaxed and fun freedom, says Crown Cruise Vacations President Ross Spalding.

There are a number of outstanding sailings for families. The specialists at Crown Cruise Vacations offer these sailings as examples of cruises to choose from for a high-seas family holiday: 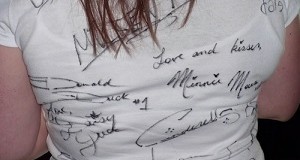 Psst! Want to know a secret? I just found out on my last Disney Cruise Line voyage. Maybe you already know.

I used to wonder why cruisers sometimes carried brand new white pillowcases, white T-shirts and packets of magic markets when they boarded a Disney cruise. Now I know.

The mystery was solved when I asked someone on our cruise.

Turns out that you can have those items autographed by Disney characters aboard the ship and not have to stand in line to get it done.

Just turn in the pillowcase or T-shirt to the guest services desk the first day of the cruise and it will be returned to you the last night with all the character signatures. Or you can request only special signatures like all the Disney princesses.

When youngsters get home after their cruise, they can rest their heads on their signed pillow cases and have sweet dreams about their magical Disney cruise.

Another popular item to have autographed by the characters is the white border of a Disney picture or poster — or the mat inside a frame for your own photo. Be sure to tape off the portion of the mat that is covered by the frame so complete autographs will show through. This is likely to be a more lasting souvenir since it doesn’t have to be laundered.

What a nice program. Just another way Disney has of making cruises more memorable.

How do they know? An inside look at Disney Cruise Line’s customer service. 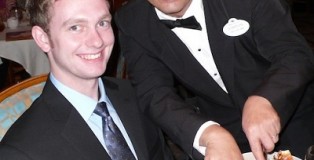 My grandson Logan did a double take when we walked into Parrot Cay for dinner the first night of our Disney Magic cruise and a server called him by name. How did anyone know Logan’s name? We sure weren’t wearing nametags.

The mystery was solved when Simoun Olba introduced himself as our server for the entire cruise. When he saw us walking toward Table 67, I guess Simoun had no trouble figuring out who was Logan since the other three of us at that table were women.

But a few days later, I was surprised myself. Looking over the dinner menu, I was about ready to order when Simoun said he bet he knew what I would be choosing.

So how did Simoun know what my dining choices would be? Because on Disney Cruise Line the same server goes with the passenger for the entire cruise. Although we may dine in the ship’s three main dining room on different nights, we always have the same servers. And these servers are experts at paying attention and knowing what their diners like. Plus I almost always go with seafood.

After that first day, our assistant server Eduar Centeno Suazo always had a Coke by my plate soon after I sat down for lunch. For dinner, it would be Sprite instead of Coke. No caffeine after lunch for me. He also knew the drink preferences of the rest of my group.

“We are the first to have rotating servers who move along with our guests,” says Hotel Director Thomas Praxmarer. “We are very proud of that because we think it lets our servers and guests get to know each other so we can take better care of our guests.”

As a cruiser for over three decades, I have noticed that serving sizes have gotten smaller – thank goodness. I always felt guilty leaving food on my plate on those early cruises and I sure didn’t need to eat everything that I was served.  Thomas confirmed that change.

“In 2006, we noticed that we served too much so we kind of scaled it down,” Thomas says. “We’ve gotten good comments about that.”

I agree. With all the dining options and delicious cuisine on Disney Cruise Line, it’s great to be able to eat a little here and there. And always save room for luscious desserts.

The Magic Is Worth The Wait 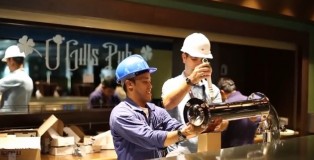 There are pluses and minuses to being the first on a cruise ship, either at its introduction or its return after a major refurbishment. It’s always nice to be the first to see, touch and play with the new features and amenities on the ship. It’s nice to be the first to sleep on the new bed, enjoy the room’s shower. But it also means running a risk that the trip may never even happen. Or, possibly even worse, some features may not yet be open or available for use.

That’s what’s happening for a couple thousand Disney Magic guests, as the major refurbishment is running a bit behind schedule, and this weekend’s voyage has been canceled. The first guests aboard the brand new Magic will make their way aboard on the 25th. The refurbishment work hit some serious snags with bad weather hampering progress. However, the ship looks incredible, with the new Aqua Dunk and pool areas, an incredible adults-only area, and some amazing new dining options and venues. In this case, the Magic will be well worth the wait.

Don’t take our word for it, take a look at the final touches as they’re happening in this video.

Where the Beer Flows Best on Disney Cruise Line 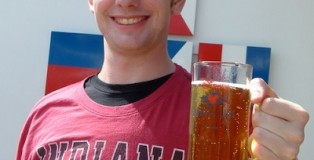 When I took my grandson Logan on a Disney cruise, he knew exactly what he wanted for a ship souvenir. And, as a 22-year-old college student, Logan was old enough to buy it.

“The Disney refillable beer mug is a great idea,” he says. “It’s much cheaper to have a beer every evening if you buy the mug. And you get to take the mug home so it’s a nice souvenir. 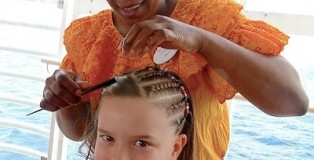 I’ve seen hair-braiding booths set up on beaches and cruise ports to serve passengers on ships.

But I had never seen a hair braiding station on a ship, unless it was in a spa. That was a first when I saw a braider busily at work on a Disney cruise.