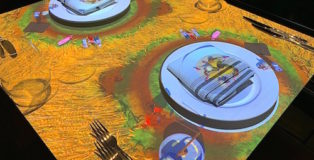 ABOARD THE CELEBRITY EDGE – Certainly the most talked-about dining experience on the new Edge is Le Petit Chef. Sort of like a movie that you eat. The basic theme is that four teeny chefs are competing to create the best culinary treat for a meal that I actually get to eat. Read more...

Choosing to Skip Long Dining Lines on the Carnival Victory 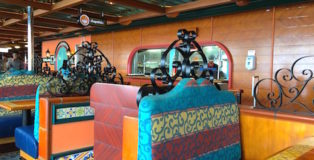 ABOARD THE CARNIVAL VICTORY – In my first day aboard the Carnival Victory, I noticed the lengthy food lines, packed swimming pools, crowded bars and difficulty finding seats to watch the nightly Dive-In Theater movies. But I also found a way to beat some of those lines – dine early. Read more... 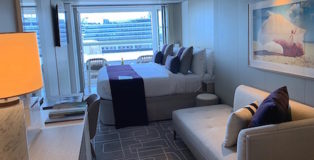 I could write a book about what has been called the “most anticipated new ship of the year” but let me share a few – besides the Magic Carpet – of my favorite discoveries aboard the Celebrity Edge.

Cruise Trivia: What is the tangerine-colored thing on the side of this ship 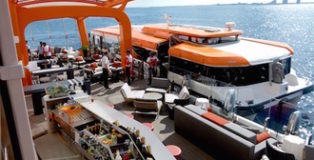 For all you dedicated travelers and cruise ship lovers, here’s a new ship question.  Debuting in November 2018 in Florida’s Port Everglades, the Celebrity Edge is definitely cutting edge in design.

But some people are puzzled about that strange tangerine-colored thing on the side of the Celebrity Edge. Do you know what it is?

I’ll admit that it looks like a piece of construction equipment accidentally left behind on the ship. However, the colorful object actually has a purpose other than being an eye-catching design feature.

A hint – its name is the “Magic Carpet.”

Don’t look at the answer below until you’ve formulated your own response. Congratulations if you are correct. If not, might be time to book a Celebrity Edge cruise and experience the Magic Carpet yourself.

(Answer) That bright tangerine structure on the new Celebrity Edge is the world’s first cantilevered floating platform. It actually moves up and down on the exterior of the ship to reach heights of 13 stories above sea level.

Although it might look like lifeboat orange, Celebrity says the color of the metal mechanical structure is tangerine.

When it’s up on Deck 5, the Magic Carpet is a restaurant offering unforgettable al fresco dining as the ship glides over the glistening water below. When it is on Deck 14, it serves as a late-night bar.

When it’s down close to sea level on Deck 2, the Magic Carpet becomes a comfortable and fun way to board a tender for a shore excursion. Instead of the unpleasant process that happens on most cruise ships when boarding a tender, the Edge has a luxurious lounge where passengers can relax before stepping on or off a tender.

By the way, those Edge tenders are large and comfy. No cramped hard wooden benches to sit on like some other cruise ships offer. The Celebrity Edge tenders have relaxing upholstered chairs, TV screens and large windows to watch the seascape coming and going.

When we returned from our short tender trip, we stepped off the tender onto the Magic Carpet where we were greeted with cold drinks and snacks. Hope other ships follow the Edge’s lead and make the necessary tender cruises for shore excursions a more leisurely and happy experience rather than the unpleasant cattle drive that many passengers dread.

Cruise back in time to ‘Love Generation’ aboard Celebrity Summit 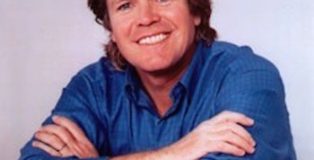 Remember Peter Noone crooning “I’m into Something Good?” How about the Hollies firing it up with “Long Cool Woman in a Black Dress?” Or The Guess Who with “American Woman?”

The music, the memories and the spirit of the love generation will come together once again when the 2018 Flower Power Cruise sets sail aboard the Celebrity Summit from Feb. 24 through March 3, 2018.  The cruise will depart from Ft. Lauderdale to Aruba and Curacao.

The Flower Power Cruise has been sold out ever since its first year in 2016.  Cruises can be booked now with cabin fares starting at $1799 per person and include admission to all shows, meals and events.

“I was on the very first Flower Power Cruise in 2016 and let me tell you, it was like taking all of the great things about that special time and putting them all together in one place,” Peter Noone of Herman’s Hermits said in a news release, “and that includes the people!  I didn’t want it to end, so I’ll be back on the cruise again next year.”

During the cruise, concerts and “throwback parties” will fill the days and nights. Other performers scheduled are The Turtles, The Association, The Family Stone, Canned Heat, The Buckinghams, The Cowsills, Mitch Ryder & The Detroit Wheels and more.

“The vibe and the spirit onboard is powerful,” Alan Rubens, Flower Power Cruise Executive Producer, said in announcing the lineup.  “Everyone there is part of the same movement, shares the same ideology and loves the same very special music and culture, or should I say counter-culture?  It’s an incredible, magical journey.”

A Make Love Not War vow renewal ceremony will be led by one of the onboard celebrities.

Cruisers also will have plenty of time to kick back and relax on the Celebrity Summit. Launched Oct. 1, 2001, the 2,158-passenger ship underwent a grand makeover and took to the high seas again in March 2016.

Turn back the clock on Flower Power Cruise 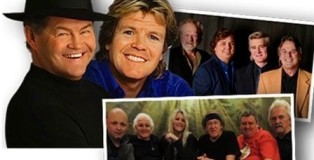 It was the ‘60s, of course. For everyone who was a part of the love generation – or for those who always wished they were – the 2016 Flower Power Cruise aboard the Celebrity Constellation will be revisiting those memorable years. Read more... 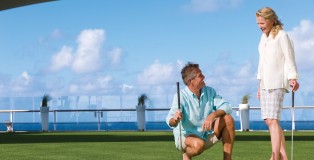 Golfing and cruising are two things that go pretty well together. Think about it, some of the best courses in the world are on islands, and accessible by ship – Bermuda, St. Martin, St. Thomas, to name just a few – and that’s not even considering all the great golf available in the British Isles and elsewhere in the world. In 2014, Celebrity Cruises is teaming up with the TOURAcademy to bring golfers on the high seas with a series of cruises designed to offer guests a chance to play amazing courses, improve their game and have a lot of fun.
Celebrity Cruise LineCruise VacationsFunjet Vacations 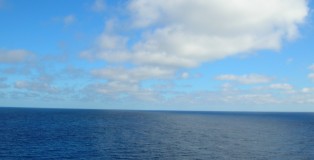 We don’t know exactly what it is, but once January comes around, people just like to start planning. It could be the new year, maybe its the stress of the holiday being in the rear view mirror, it might even be just people looking to escape the winter blahs. We just know that when travelers ring in the new year, they start to plan vacations for the year ahead.  People in the travel industry often call the first three months of the year “wave season.” And booking during wave season can get you great deals. By no means is this an exhaustive list of the deals out there, but we’re sharing the best of the best today.
Celebrity Cruise LineCruise Vacations 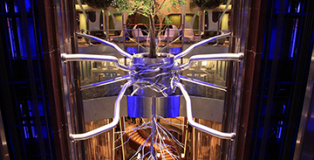 Cruise ships are as much museums of modern art as they are anything else these days, and that is very much apparent in the new Celebrity Reflection, which finally set sail from US waters last week. As part of our continuing coverage on the ship, we wanted to share about the fantastic artwork onboard.
Celebrity Cruise LineCruise Vacations

Reflections on the Celebrity Reflection 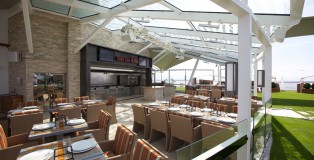 The Celebrity Reflection hits the seas this week on its inaugural passenger voyages. It does a short schedule in Europe before crossing the Atlantic down to Florida in December. New features on Celebrity’s latest and greatest include art classes on the Lawn Club from Art Center South Florida, the addition of Aqua Class suites and a unique to Celebrity spa which includes a hammam, sensory showers and an infrared sauna. Guests can even book their own private cabana space on the lawn with the addition of the Alcoves.
« Previous 1 2 3 Next »